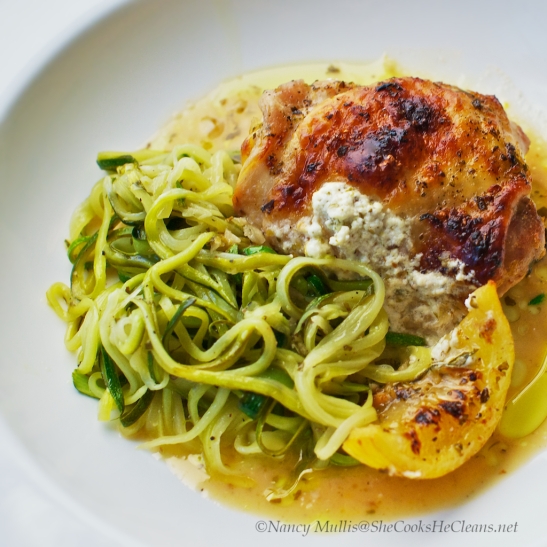 Our oven has been out of commission all week, so cooking has been a bit of a challenge.  We tried to grill as much as possible, but twice got soaked again in the thunderstorms that always pop up promptly at 6:30 pm (or whenever the grill has reached the right temperature).  Also, it’s hot as blazes out there and the mosquitoes are thick and hungry!  No fun!

Another alternative to the oven is cooking in a tagine on the stovetop.  The tagine is similar to a mini-oven, with its curved lid that keeps the heat over the chicken and the moisture in.  Ina Garten, aka as the Barefoot Contessa, has a fabulous recipe for Lemon Chicken Breast that is a classic medley of lemon, garlic, and herbs.  I thought this recipe would adapt well to the tagine since the chicken only needs to simmer in the lemon, garlic, and herbs until it’s tender.  My broiler was still working, so after the chicken was done, it was broiled for a few minutes until the skin was crispy and brown.

What could make this recipe even better?  I combined it with one of my other favorite chicken recipes – Goat Cheese Chicken!  The creamy goat cheese combined with intense lemon and garlic was out of this world!  The sautéed zucchini noodles were also perfect with this mix of flavors.  We’ll be having this again!

Divide the goat cheese into 6 equal portions.  Using your fingers, loosen the skin from one side of the chicken thigh to form a pocket for the goat cheese.  Try to keep the skin connected to the thigh on the other sides as much as possible, but don’t fret about it if it comes loose.  Place a portion of goat cheese under the skin of each thigh, then press down gently on top of the skin to distribute the goat cheese over the thigh.  Season the chicken liberally with salt and pepper. 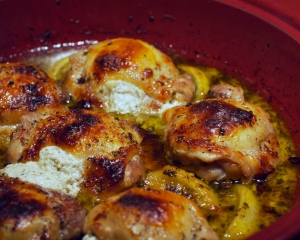 Over medium heat on stovetop, heat olive oil in the tagine (or a Dutch oven).  Add the garlic and cook, stirring, for about 1 minute.  Do not allow garlic to brown.  Add wine, lemon zest, lemon juice, herbs, and 1/2 teaspoon of salt.  Place the chicken thighs skin-side-up over the sauce in the tagine.  Brush the thighs with the sauce.  Tuck the lemon wedges in the tagine among the chicken pieces.  Simmer for 30-40 minutes until the chicken thighs are tender and cooked through; occasionally brush the thighs with more sauce.

Spoon off the excess fat and oil from the tagine and reserve for cooking vegetables.  (If making zucchini noodles, just toss a couple tablespoons of the fat with the zucchini and saute until tender, but not falling apart.)

Start the broiler and place the bottom part of the tagine with the chicken a few inches below the flames or broiler element.  Broil until the tops of the thighs are crispy and well-browned.

Allow the chicken to rest a few minutes so you don’t burn yourself.  Serve hot with pan juices…Enjoy!

Robert Johnson was, in arguably, the most influential bluesman ever born. His 29 songs literally transformed American music, and laid the foundation for not the blues as we know it, but rock and roll as well. Recorded in two sessions in the mid-’30s, all versions of the material up to now suffered from the limitations of the medium at the time- crude recording equipment, fragile 78 discs, and endless reissues that all tended to muddle the sound. No longer. The Centennial Collection

presents this legendary art clear of most of the clicks, pops and background noise that hampered previous versions, and finally you are close as you’ll ever get to sitting in that Dallas hotel room beside Johnson as he sang into a microphone in the corner. “Crossroads”, “32-20 Blues” and even the throwaway novelty number “They’re Red Hot” literally sound like a symphony. You hear his guitar in spacial clarity for the first time, and his vocals will chill your bones. THE blues disc of the year- if not the last 100.