Santa brought me several bags of Bob’s Red Mill Gluten-Free, Dairy Free Pizza Crust mix this past Christmas.  Evidently Santa not only knows when you’ve been bad or good, but he also is aware when you have been suffering a serious craving for pizza!  Since I haven’t experimented with making my own gluten-free crust from scratch, I cannot compare this mix to the many recipes out there.  However I can tell you that I appreciated the convenience of having a pizza mix (instead of buying 5 or 6 kinds of flour), and we really, REALLY enjoyed having a slice of pizza that you could pick up and eat properly with your hands!  Thanks, Santa!

For our first pizza, we decided on one of our old favorites – barbeque chicken with bacon, pineapple, and mozzarella!  Since the last post on the blog was Oven Barbequed Chicken, I think you can follow the trail of leftovers leading to this choice.  In truth, there were not enough chicken leftovers, so I ended up making more barbequed chicken using boneless, skinless thighs baked in Bone Suckin’ Sauce.  The method was the same, except I didn’t brown the chicken since there was no need to crisp the skin, and I baked it for an hour until the chicken was tender enough to shred with a fork.

So, how did this pizza stack up to “real” pizza?  If you’re expecting chewy dough with some “pull” to it, you’re not going to find it here.  I’m not sure there is a gluten-free crust out there that has the same texture and consistency of a gluten-containing crust.  Gluten, unfortunately, is what gives bread that stretchy quality.  The crust of this pizza is crispy, and is more reminiscent of biscuit dough.  Is that bad?  Not in our opinion; we gobbled this down as if we had not eaten in years, stopping only to exclaim “mmm” or to grunt “pizza good, pizza good”.

When the weather warms up, I can’t wait to try this on the Big Green Egg!  There’s nothing like the taste of a wood-fired pizza!

Let’s get started building this pizza!

Note:  The pizza mix makes 2 12-inch pizzas.  The dough can be prepared ahead and stored in the refrigerator for several days.

Ingredients (for one pizza):

Arrange one rack in the center of the oven, and another rack at the bottom.  Place a pizza stone (if you have one) on the bottom rack.  Preheat oven to 425F.

In a large bowl, combine the warm water and yeast, and allow to stand a few minutes to activate the yeast.  Whisk in eggs and olive oil.  Add the pizza crust mix; blend with electric mixer at medium speed for around 1 minute, or until well combined and dough is coming together.

Gather the dough together in a ball using a silicone spatula, and split it in half.  Place the second half in a separate bowl.  It helps to handle the dough with wet hands – it is sticky.  Cover both bowls with a clean kitchen towel, and place in a warm place to rise for at least 20-30 minutes.  (Near a warm oven is good enough, or you could put the bowls in lukewarm water if the room is cold.  Also, I left the dough out for several hours before using it, and it was okay.  If you are planning on making only one pizza, after the dough has risen, wrap it in plastic wrap and store in the refrigerator.  When ready to bake, allow to rest at room temperature for at least 30 minutes.)

Ready for the oven!

Grease a 12-inch pizza pan with olive oil.  Rub your hands with olive oil, and place dough in the pizza pan.  Spread the dough out to cover the pizza pan, with more dough at the edges to contain the sauce.  You will notice here that the dough does not stretch – you just have to smush it in place.  Sprinkle the dough with sea salt and place on the center rack of the oven.  Bake the crust without toppings for 7-9 minutes. 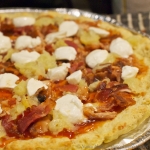 Remove from oven.  Spread a thin layer of barbeque sauce over the surface of the pizza (just a few tablespoons).  Distribute the desired amount of shredded chicken, chopped bacon, pineapple, and mozzarella cheese over the crust.  Slide the pizza from the pizza pan onto the hot pizza stone, and bake for 15-20 minutes until crust and cheese are browned and topping is bubbling hot.  If you aren’t using a pizza stone, you could bake the pizza in the pan, or for a crisper crust, bake directly on the oven rack.

Cut the pizza into slices and serve.  Don’t be like me and burn the roof of your mouth – let it cool some before shoveling it in!

Pizza is back! My goodness I’ve missed it! Thank you Santa…! The soundtrack today features a pair of rock’s most “out there” performers. First, the wild-eyed Texan Roky Erickson and the 13th Floor Elevators with Easter Everywhere

, the bands masterpiece. Loaded on acid and freaking out in Texas in the 1960s, the Elevators somehow created a cult record while Erickson lost his mind. But when it worked- as on “She Lives (In a Time of her Own)” or their version of Dylan’s “Baby Blue”, this is a seminal record, and a look back at a time when hippies walked the earth.

Long before they did The Wall or Dark Side of the Moon, Pink Floyd was as psychedelic as they came, in large part due to their founder, Syd Barrett. Their 1967 debut, The Piper At The Gates Of Dawn

is Syd’s finest moment, containing “Astronomy Domine” and “Lucifer Sam” among others, and is a trippy headrush of

an album. The band went on of course to become megastars, but their “Crazy Diamond” leader wasn’t along for the ride, releasing a handful of singles and this grand album. It’s groovy, man.