Last week a wise reader alerted me to a zero carb, low-calorie noodle called “Shirataki de Konjac” – well, that’s what they are called in France.  (Thanks, Donna!)  I did a little research and found that shirataki are are thin, translucent, gelatinous noodles made from the konjac yam (also known as elephant yam or devil’s tongue yam).  This noodle is made mainly of soluble vegetable fiber, which has the health benefit of slowing digestion, and therefore slowing the adsorption of glucose and allowing more nutrients to be adsorbed.

I’ve never seen them in the grocery stores I frequent, although there are plentiful Asian markets that likely carry these noodles.  However I did find them on Amazon

– accompanied with mostly positive reviews, but plenty of reviews attesting to a funky odor and rubbery texture.

Not to be easily dissuaded in my quest for a decent, low-carb noodle, I ordered a six-pack of “Miracle Noodle Shirataki Angel Hair Pasta”.  These noodles come in a plastic (BPA-free) pouch, suspended in liquid.  They store at room temperature and unopened, have a 6-month shelf life.  I was repeatedly warned that they “smell”, so when I opened the package I expected a blast of noxiousness.  Truth is, they do have a fishy odor, but it is no worse than a  whiff of fish sauce.  Per the package directions, I thoroughly rinsed the noodles with cold water, then put them in a pan of boiling water for 1 minute.  There was no longer any smell, and when I tasted a noodle, it really had no taste.

Next step, I drained the noodles and dried them off with paper towels.  They are rather bouncy in consistency at this point, quivering like a bowl of jelly when you touch them.  Reviewers on Amazon suggested cutting the noodles up a bit with kitchen shears, so they would be easier to stir fry, so I clipped them up a little. 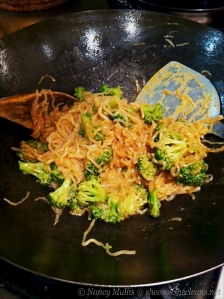 Time to cook!  I stir-fried some broccoli for a minute, then added the noodles and spicy sauce to the wok and tossed it for 2-3 minutes until the noodles were well-coated in the sauce.  The noodles really soaked up the sauce and transformed from colorless and translucent to something resembling traditional noodles.

While the texture of the finished product is still a little “bouncy”, I would NOT describe it as rubbery or unpleasant.  I thought they were tender, but still had a little bite to them that was not much different than al dente pasta.  We each ate approximately one 7-ounce bag of Miracle Noodles – there were no leftovers!  Some people report digestive discomfort, possibly due to the fiber, but neither of us has had any complaints.

I’m looking forward to eating more of these noodles to satisfy my pasta cravings.  They are not recommended for tomato-based sauces – as they adsorb the water and not the flavor.  However I think they will be great with any oil-based sauce (pesto!) and for Asian dishes.  I’ll keep you informed!

For more health benefits, check out Miracle Noodle’s website.  They also have recipes and other varieties of pasta.  Here’s my recipe for a quick and healthy, low-carb dinner with seared tuna.  Enjoy!

Whisk together the tamari, sesame oil, rice wine vinegar, and honey.  (The honey is optional, but I like a little sugar in the marinade to help make a nice sear on the fish.)  Marinate the tuna steaks in the tamari mixture for 30 minutes to 1 hour before cooking.

Blanch the broccoli in boiling water for about 1 minute.  Remove and drain.  Set aside.  (Note:  I used the same water to first blanch the broccoli – removing the broccoli with a slotted spoon to a colander – then for cooking the noodles.  It saves a little time.)

Heat a wok over medium-high heat with about 1 tablespoon of oil.  Add the broccoli and stir-fry until crisp tender (not limp), about 1 minute.  Add the noodles and about 1/2 cup of sauce, and toss for 2 or 3 minutes until the noodles and broccoli are well-coated in sauce.  (I also added a little bit of the tuna marinade to the wok to help incorporate the sauce.)  Set aside.

In a heavy-bottomed skillet, heat about 1 tablespoon of oil over medium-high heat.  Allow to become very hot, but not to the smoking point.  Place the tuna steaks in the skillet and cook for no more than 2 minutes on each side. (Watch for splattering when you first add the steaks.) Just before the steaks are done, add the remaining marinade to the pan and turn them quickly in the marinade to coat.  Remove the steaks from the pan immediately to prevent overcooking (steaks should be seared on the outside, but nice and red in the center).

Serve the tuna with the spicy noodles, sprinkled with toasted sesame seeds.

Jim Dickinson was one of American music’s greatest, if criminally unsung

heroes. A brilliant musician (that’s him on the piano on the Stones “Wild Horses”), legendary producer of such seminal records as Big Star’s Third, the Replacements Pleased to Meet Me and father to Cody and Luther Dickinson. He released several great albums on his own such as I’m Just Dead I’m Not Gone, released after his death in 2009. Recorded with his sons band- the North Mississippi All Stars, it’s a rowdy romp thru the sounds of the south.

Killers From Space from 2007 finds Dickinson with another wide-ranging

album, from the classic “Nature Boy” to Doug Sahm’s “Texas Me”. You owe it to yourself to discover this legend of the southern sound!

This entry was posted on January 19, 2013 by She cooks...He cleans in Entrees, Product Review, Seafood, Side dishes.