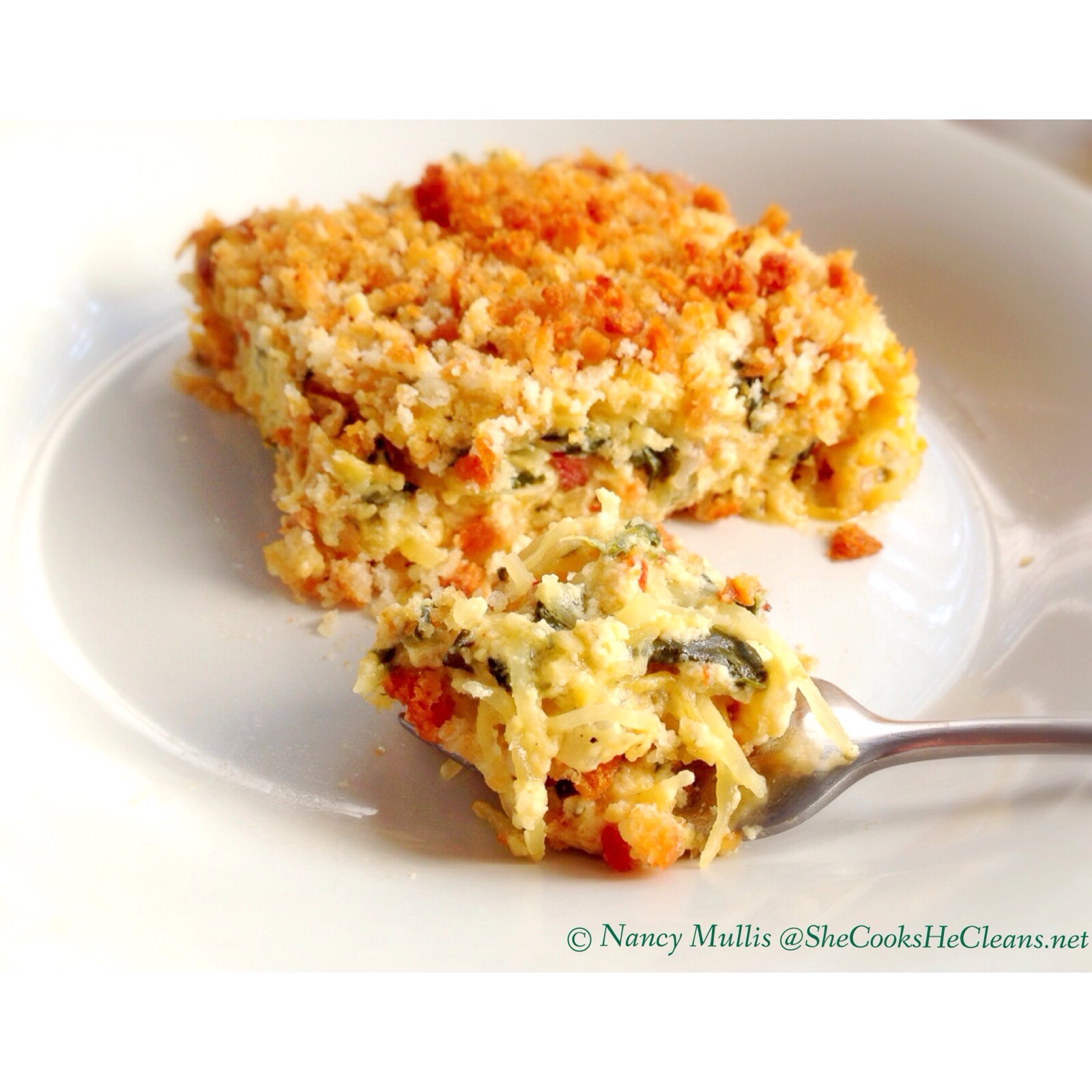 Truthfully, I have not been much of a spaghetti squash fan when people have touted it as an alternative to spaghetti noodles. It always turned to mush for me and seemed kind of bland. I noticed this appealing recipe on Pinterest and decided to give spaghetti squash another try. As usual, I had some different ingredients on hand and other ideas, so I’ve modified it a bit. We were very happy with the results, best demonstrated by how quickly the leftovers disappeared!

2. Cut the spaghetti squash in half, lengthwise. Scoop out the seeds and loose fibers. Drizzle with olive oil and season with salt. Place the squash halves on a baking sheet, cut side up, and cook for 35-45 minutes or until tender. Half way through cooking, I turn the squash over (cut side down) to help keep it from drying out. When done, remove from oven and allow to cool. Using a fork, scrape out the squash and set aside. Turn oven temperature down to 350F.

3. While the squash is baking, roast the red pepper over an open flame until charred all over. Allow peppers to steam and cool off in a paper bag, remove char and seeds, and chop coarsely.  If you are unfamiliar with flame-roasting peppers, you can find more detailed instructions here. (Alternatively, you can slice and roast the peppers in the oven on a baking sheet until soft and beginning to brown.)

4. In a saute pan, cook the onions in 1-2 tablespoons of olive oil over medium-high heat until they are soft. Add garlic and cook for about 1 minute. Add chopped spinach to the pan by the handful, lightly tossing each addition until wilted before adding the next handful. Season lightly with salt. Remove from heat.

6. Top with toasted breadcrumbs. (I toast fresh bread crumbs on the stovetop in a skillet with about a tablespoon of olive oil, stirring until lightly browned.)

7. Bake uncovered at 350F until hot throughout and golden brown, around 30 minutes.

Leftovers be gone! Yummy stuff indeed. As is our musical menu. First up is Traveller

by Chris Stapleton. A former member of The Steeldrivers, Stapleton has a rowdy outlaw sort of voice and material that fans of Jason Isbell and Sturgill Simpson will latch onto in a big way. He’s a star on the way up.

Next up is the legendary Terry Allen with Lubbock (On Everything)

. From the same part of Texas that gave us the Flatlanders, Buddy Holly and Waylon, Allen may be the most “out there” of them, and this early record is a testament to that. From the opening “Amarillo Highway” to “Truckload of Art” this a crazy offering, with Allen’s wonderful wordplay and funky piano. A must.