I’m always on the lookout for good chicken salad. I like it with nuts and a touch of something sweet, like dates or other dried fruits. Sometimes I find a good tasting version in the deli section of a grocery store, only to make the mistake of looking at the ingredients to find all sorts of unpronounceable additives and preservatives. Ugh. As the t-shirt James found for me, here, says, “I don’t eat crap.”

So, it finally occurred to me – why not make my own chicken salad?  I don’t know why I’ve never done it before, because it really doesn’t take much time.  The added benefit, of course, is knowing that your chicken salad is full of healthy, organic ingredients…and not that other stuff.

Ingredients (All approximate amounts, because it’s a salad after all!)

Put chicken breast halves in a medium saucepan and add enough chicken broth to cover well.  Bring to a boil, then reduce heat to simmer.  Cook for 20 minutes, skimming the surface occasionally to remove flocculates.  Remove from heat and let chicken sit in hot broth for another 20 minutes.  Chicken breasts should be cooked through, but avoid overcooking to prevent chicken from becoming tough.

Remove chicken from broth; strain broth and reserve for another use.  When chicken is cool enough to handle, chop into small pieces and place in a medium bowl.  Add celery, dried fruit, and pecans.

In a small bowl, mix together mayonnaise, vinegar, honey, and dash of Worcestershire sauce for the dressing. (This is fairly tangy…if you don’t like tangy, add less vinegar.)

Toss chicken mixture with dressing.  [Note:  the chicken and dried fruit tend to adsorb a lot of moisture, so it should be a bit extra-creamy at this point.  You may need to add additional dressing, depending on how moist you like your chicken salad to end up.]  Add salt and pepper to taste.  Cover with cling wrap and keep refrigerated until ready to serve.

There’s my lunches for the week, and a couple of snacks for James too!

Chicken salad? How about some chicken pickin’? (Groan!) 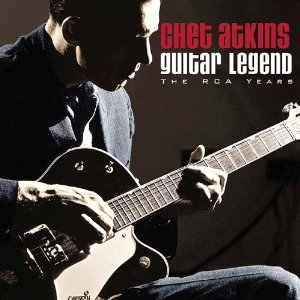 If you’re not hip the mastery that was Chet Atkins, Guitar Legend: Rca Years

is a good place to get started. His technique was flawless, his humor evident and his song selection spanned all genres. Ear candy!