Thanks to some powerful storms that rolled through Georgia in the wee hours of April 4th, we were without electricity for 20+ hours.  The lack of all-things-electric for a day was a gentle reminder of how our lives revolve around computers, the internet, and the ability to light a room at the flick of a switch. We were also reminded how fortunate we are to take these things for granted, and grateful that Mother Nature spared us and our trees…others were not so lucky.

I had already planned on Beef Stroganoff for dinner, so Beef Stroganoff it was. You can’t get much more primal than this!  James rigged up a couple of lanterns in the kitchen.  Steaks were pan-seared, rested, then sliced into strips.  Onions and mushrooms were sauteed in olive oil, simmered in brandy, stock, and Worcestershire sauce until the liquids were reduced, then finished up with sour cream.  The steak slices were returned to the pan to warm up and get coated with the creamy sauce.  Cauliflower was steamed, then tossed in butter from grass-fed cows.  We ate by candlelight and drank Pinot Noir – it was all very romantic!  We should do it again sometime…and just pretend the power is off.

Romantic indeed…as was the evenings entertainment. Without juice to spin the turntable (yes, we’re old school that way…), relied on an old favorite movie, the entirely predictable, who cares its 2 hours of Willie Nelson music, Honeysuckle Rose

. While the movie didn’t win any awards for originality, the musical moments (Willie, and Emmylou on a few songs) certainly makes up for it. 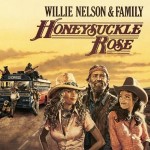 So, next time you want a special evening, douse the lights, cook some beef, and watch some Willie. Guaranteed!