I don’t remember the last time I had chocolate cake.  Giving up wheat flour and cutting down on sugar hardly endorses the consumption of cakes and pies, and we have strayed little from our primal eating pathway to better health.  However, we are on our first week-long vacation since November and we’re at our favorite spot in New Mexico – – that deserves a little celebration!

I spotted this recipe for gluten-free, individual chocolate cakes at 5 second rule, an incredible food blog with a great name.  Not only was I allured by the promise of warm, soft, rich chocolate, but also these cakes are a breeze to make.  I didn’t change a thing in the recipe, except to adapt it to 2 servings.  To make more would be too tempting, because they are indeed rich with a nice crust and gooey center.  We ate them warm from the oven, with a touch of heavy cream.  Heavenly!

Preheat the oven to 400F with a rack in the lowest position.  Butter 2 8-ounce size ramekins.

Melt the butter and chocolate together in a double boiler, stirring until smooth.  Remove from heat and let cool slightly.

Meanwhile, in a separate bowl, combine the sugar, eggs, almond extract, and salt.  Beat with a whisk (or electric mixer) for 3 minutes, or until thickened.  Gradually sprinkle the almond meal over the batter and mix until just combined.  Fold the egg mixture into the cooled chocolate.

Divide the batter between the ramekins and set on a rimmed baking sheet.  Bake until the tops are puffed and dry, and a skewer inserted into the center comes out with barely moist bits, 10-13 minutes.  (At high altitude, such as in Santa Fe, the cakes baked @ 415F for around 25-30 minutes.)

Note:  This recipe can be doubled for 6 servings in 4-ounce ramekins. 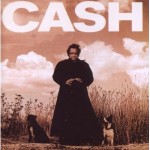 One classic deserves another, yes? And it doesn’t get much more so than the man in black, Johnny Cash.  His 1994 album American Recordings

introduced Cash to a new generation of fans who likely weren’t born when “Ring of Fire” climbed the charts, and started his “second career”. Just Cash and his guitar, this is a haunting, moving record featuring unlikely song choices from the likes of Nick Lowe and Tom Waits, this is simply one of the greatest albums of his storied career.

Chocolate cake give you a bit of a sugar rush? Feel like some boogie woogie? Knew ya did…and you’ll have your feet moving to Folkways Years 1959-73

from Memphis Slim. A deft pianist and lively singer, this is great stuff, no matter what your taste in music.