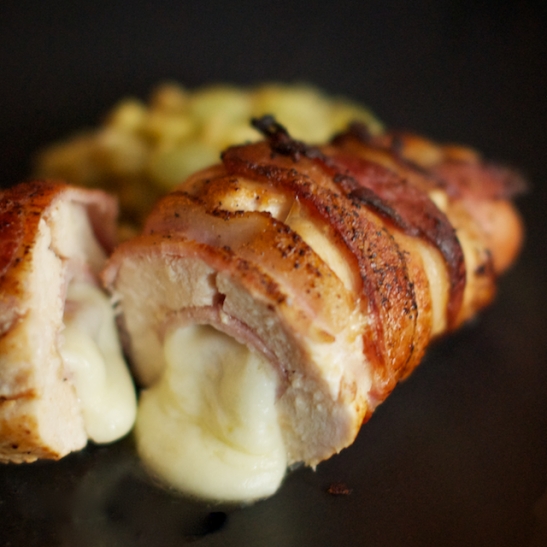 Chicken sticks out its "cheese tongue" at those who scoff...

Ok, I had my doubts about posting this recipe because of this photo – let’s just say it reminds me of those photos of jack-o-lanterns spewing their insides out.  However, the kind Facebook followers of our blog thought it looked yummy, and who am I to argue with reason?  It was very yummy!  (Thanks in particular to reader J. Mustafa for coining the term “cheese tongue”!)

Chicken Cordon Bleu, prepared the traditional way, of course is not wrapped in bacon.  I’m sure this was an oversight by the French, and one that we have corrected here.  Another improvement in this version, at least over our supermarket’s version in the prepared foods case, is the nifty encasement-technique for the cheese that keeps it from oozing out of the chicken in the oven.  I like the cheese to ooze out on my plate, where I can eat it!

We thought this chicken was trés délicieux!  Bon Appétit!

Smear the insides of the butterflied chicken halves with about a teaspoon (each) of Dijon mustard.  Season liberally with pepper.  (Note: You do not need to add salt – there’s plenty in the ham and bacon.)

Cut the cheese slices into strips about 1/2 inch wide, and a bit shorter in length than the “long side” of the chicken breasts.  Stack into 2 piles, one for each chicken breast.

Lay 2 pieces of ham on a flat surface so that they overlap by about a third.  The total length of the ham should be about 1 1/2 inches longer than your cheese strips.  Place one stack of cheese in the center of the ham slices, then fold the short ends back over the cheese.  Start at one of the long sides and roll it up like a burrito.  Repeat for the remaining ham and cheese.

Preheat the oven to 375F.  In a heavy skillet, brown the bacon-wrapped breasts on all sides.  Place the chicken in the oven — in the skillet if it is oven-proof, or transfer to a small baking dish.  Bake for 40-50 minutes, or until the temperature at the center of the chicken is around 155-160 degrees.  Remove from oven, and allow to rest on a cutting board, tented with foil, for at least 10 minutes before serving.  The internal temperature will continue to rise and will complete cooking the chicken (and the wait will keep you from burning your mouth on the yummy melted cheese)! 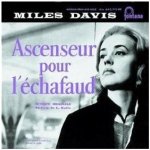 French, you say? How about this classic Miles Davis soundtrack, Ascenseur Pour L’Echafaud (Lift To The Scaffold)

? Recorded in two days for a Louis Malle film, this is late ’50 Miles- cool and subdued- a perfect film noir soundtrack, as well as good jazz. Vive la France!