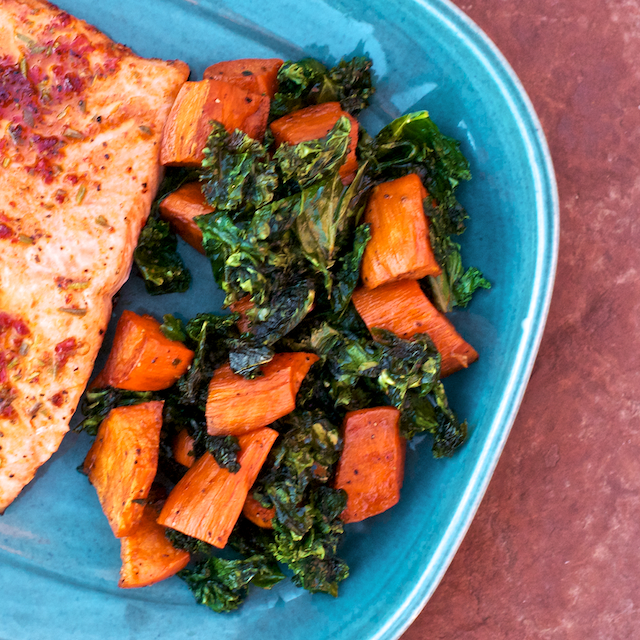 I promised to post a recipe for butternut squash and kale, but my friend Ed says he doesn’t care much for butternut squash.  Hopefully he likes sweet potatoes!  I don’t see how anyone could not like either one, since they both roast-up to be creamy inside with a sweet, caramelized crust on the outside.

I changed this up in another way from the recipe I previously posted on facebook.  Since this batch accompanied a delicately seasoned crabmeat-stuffed salmon (purchased prepared at the seafood counter), I omitted the 2 cloves of garlic and replaced it with a bit of dried cherries and cranberries.  That does add more carbs to this dish; my sweet tooth seems to be getting the better of me lately!  However, the sweetness blends well with the kale, and complements the salmon and crabmeat stuffing.

I promise to post a non-orange vegetable without dried fruit in the near future!

Preheat oven to 400F. In a small roasting pan, toss the sweet potatoes with salt, pepper and enough coconut oil to coat potatoes and pan.  Cover with foil and roast 15 minutes; remove foil and continue to cook until potatoes are tender and slightly browned (shaking pan occasionally, about 10 minutes).  Remove from oven.  [This step can be done in advance and the sweet potatoes set aside until dinner time.]

In the meantime, heat ~2-3 T of butter/bacon fat in a frying pan over medium high heat.  Start adding handfuls of kale and toss in pan until wilted.  Keep adding kale until you have the amount you’d like, cooking until wilted and to desired tenderness.  Add the dried fruit and a dash of balsamic vinegar and mix well.

Add the sweet potatoes to the kale and toss until heated throughout and well mixed.  Adjust seasoning and serve!

Does a Texas troubadour go with sweet potatoes and kale? Heck yes! 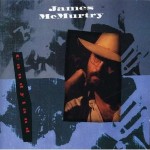 James McMurtry is a songwriter in the style of Joe Ely, Guy Clark, Butch Hancock or a more rockin’ Townes Van Zandt. This 1992 release Candyland

was produced by John Mellencamp, and is a perfect example of McMurtry’s weary, jaded and world-wise art.