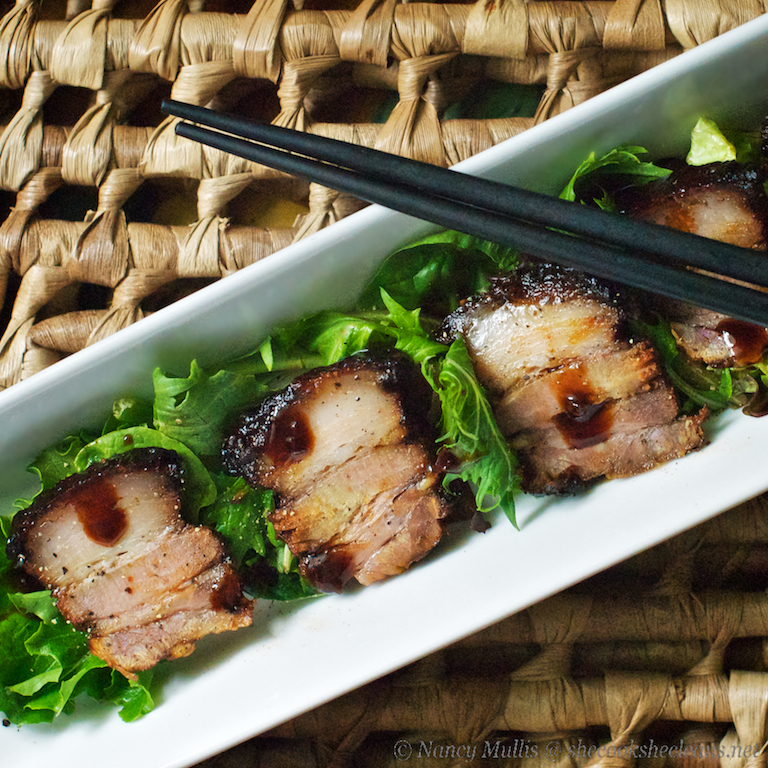 I hope you are not tired of pork belly, for a couple of reasons.  First, this is the best version yet!  (Yes, I say that every time.)  The second reason is because I still have a few pounds of it in my freezer, so chances are you are going to see more of it.

While looking for a marinade for ribs, I came across what has to be the most highly praised recipe short of when the ancient Mesopotamians recorded the first recipe for beer, as handed down from the god Enki.  Ian Knauer, a former food editor for Gourmet magazine, said “These ribs just might be the best thing I’ve ever come up with.”  Food 52 proclaimed the recipe “Genius”.  Ruth Reichl wrote about them in her journal after making them again and again.  Review after review – serving these ribs made you the most popular person in the world. Well heck, I thought, if this is good enough for ribs, it should be heavenly on pork belly!

Looks heavenly, right?  To use Ms. Reichl’s words – “Smokey, Sweet, Tangy, Sticky”  – that’s all you have to know.

I halved the original recipe since I was marinating a small slab of pork belly vs 8 pounds of ribs.  Also I substituted coconut palm sugar for the brown sugar, to decrease the glycemic load.  We were smoking ribs, so the pork belly went in the Big Green Egg with the ribs.  However, you can also roast it in the oven using these instructions from Jamie Oliver.

The last time we smoked a pork belly, we found that the skin was very tough and ended up cutting it off.  This time I borrowed Jamie Oliver’s technique for crackling the skin before putting the belly in the smoker, which resulted in a crispier, edible rind.

Mince and mash garlic to a paste with the 1/2 teaspoon kosher salt.  Stir together in a small bowl with rosemary, sugar, vinegar, cayenne, remaining salt, and black pepper. Pour the marinade in the bag with the pork belly.  Seal bag (squeezing the air out) and massage the marinade into the pork belly, coating it thoroughly.  Marinate in the refrigerator for 8 to 24 hours (go for 24 hours if you can).

To prepare the glaze, bring the vinegar, sugar, and water to a boil, stirring occasionally.  Continue to boil (watching carefully) until the mixture is thick and syrupy and reduced to about 1/2 cup.  Set aside.

About an hour before you are ready to start cooking, remove the pork belly from the refrigerator and allow it to come to room temperature.  Preheat oven to 425F.  Line a shallow roasting pan with foil.  Place the pork belly in the roasting pan, skin side up.  Wipe excess marinade off the skin, for best exposure to the heat.  Put it in the oven and roast at 425F for around 30 minutes, or until you see the skin of the pork puff up and start to turn into crackling.  [Since it has been soaking in balsamic and sugar, the pork is going to appear VERY black.  Don’t worry, it is not burnt!]

Prepare the smoker to cook at 225-250 degrees (F).  (On the Big Green Egg, be ready to use the plate inverter, feet up, with a drip pan and grill rack.)  When the coals are ready, throw in the wood chips.  Remove the pork butt from the marinade and set up on the grill, skin side up, over a drip pan.  Close the smoker and let it go for at least 1 hours before peeking in on it.  We cooked the pork belly for approximately 3 hours.  The internal temperature should be at least 150F. During the half hour or so, occasionally brush the pork belly all over with the balsamic glaze.

When it is done, let it cool off some, take a thin slice, and watch it melt in your mouth.  Other serving suggestions:  Pork belly salad with mixed greens, drizzled with balsamic-ginger dressing.  Pork belly rolled with roasted vegetables or Asian slaw in a tortilla.  Pork belly with scrambled eggs.  Mmmm….

Gotta love the pork belly! And our musical guests today, The Jayhawks. One of few bright spots in the ’90s, Gary Louris and Mark Olsen have created beautiful music for plenty of years. Their harmonies are too die for, and as Gary once described them, “We’re folk music…but louder”. Excellent. First up is the record that got them noticed, Hollywood Town Hall

. This is one of those records that I’ve heard so much it’s memorized. From start to finish, not a weak cut on it.

Their next album, Tomorrow The Green Grass

is considered by many to be their masterpiece. With cuts like “Blue”, “Over My Shoulder” and a great version of Grand Funk’s “Bad Time”, it’s modern Americania at its best.