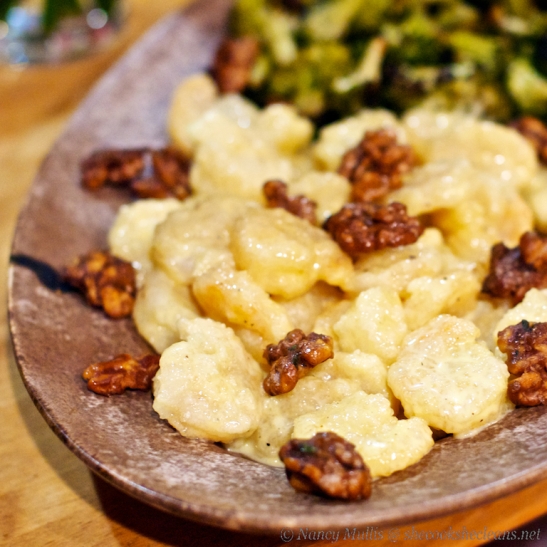 My memory is not always the best.  I often hear people reminiscing with such detail about their past  – details that I can never muster from my foggy brain.  What they wore on their first day of school, their thoughts on the first time they saw the ocean, where they were when they first heard Stairway to Heaven.  I can’t remember that stuff!  What I can remember is every  time that I have had Honey Walnut Shrimp.  The first time was in San Francisco in the 80’s with my friend Cynthia, before we set off on our grand camping trip through Napa Valley and Yosemite.  The last time was also in California, with James on our 2nd honeymoon trip through the Russian River Valley.  Those delicate, crispy-fried shrimp, tossed in a creamy sauce, lightly sweet with honey, and topped with crunchy candied walnuts… I had never had such a sublime dish in a Chinese restaurant back home.  Nor could I find it anywhere nearby…until now!  Once I got over that fear of frying, this wonderful treat is now available in my own kitchen.

I adapted this recipe from Chinese Honey Walnut Shrimp found at Use Real Butter, but it is originally from Easy Chinese Recipes by Bee Yinn Low.  The main change I made was to use far less sugary walnuts.  Instead of glazing the walnuts in syrup, I toasted them, then tossed them in a butter and coconut palm sugar mixture, with a little rosemary and sea salt thrown in to make them more savory (nut recipe adapted from marthastewart.com).  I also replaced the cornstarch coating on the shrimp with tapioca starch.

We enjoyed these shrimp with a side of roasted broccoli.  It made a fantastic celebratory New Year’s Eve / Wedding Anniversary dinner.  (Note:  Goes well with champagne!)

To prepare the walnuts:  Preheat oven to 350F.  Spread the walnuts on a baking sheet in a single layer and roast in the oven for 10-15 minutes.  Remove from oven and set aside.  In a large skillet, melt the butter.  Stir in the coconut palm sugar, honey, and rosemary until well blended and the butter is foamy.  Add the walnuts and cook over medium-high heat, tossing continuously, until the walnuts are well-glazed with the sugar mixture (3-4 minutes), being careful not to burn the walnuts.  Spread the walnuts back out on a parchment paper-lined baking sheet to cool.  Sprinkle with sea salt while hot.  Toss them around occasionally to keep them from sticking together.  The sugar-glaze will harden and will not be sticky when they are cool.

Thirty minutes before cooking the shrimp, mix the egg white with the salt in a medium-sized bowl.  Rinse the shrimp and dry with paper toweling.  Add the shrimp to the egg whites and allow to marinate, stirring occasionally.

Prepare the sauce by mixing the dressing ingredients together in a small bowl.  Set aside.  Put about a cup of the tapioca starch in another small bowl for dredging the shrimp. 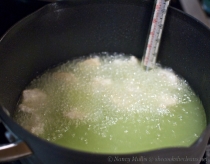 Prepare a cooling rack over paper towels for draining the shrimp.  Heat 2 to 3 inches of oil in a heavy pan to 350F.  Working in small batches (6-8 shrimp, depending on the size of your pan), dredge the shrimp individually in the tapioca starch, shaking off the excess, and drop carefully into the hot oil.  Fry until the shrimp are crisp and starting to brown (about 4 minutes). 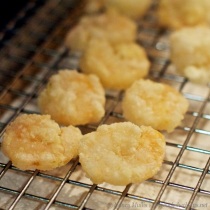 Maintain the oil temperature at 350-375F.  Scoop the shrimp out with a strainer and place on the cooling rack.  Repeat for each batch until done.

Place the crispy shrimp in a large bowl.  Toss with the dressing until glossy and well-coated.  (You may not need all the dressing.)  Serve with the candied walnuts over the shrimp.  Enjoy! 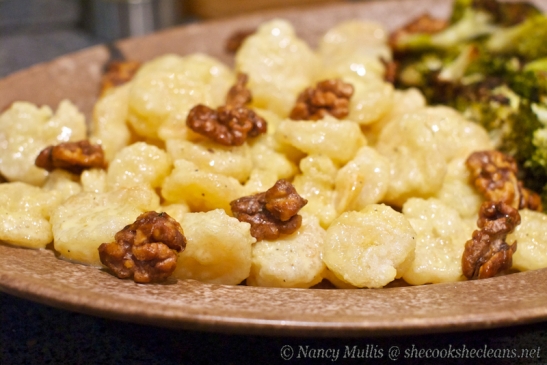 Truly a meal fit for an anniversary…and the first post of the new year! Going to start off our “menu music” with a couple from one of my favorite musicians, Collin Walcott. A founding member of Oregon, he sadly died far too soon in a car crash while on tour, but not before released a body of work that married his sitar and tablas with improvisational attitudes of the West. First was his first solo record, Cloud Dance. Walcott is joined here by guitarist John Abercrombie, Dave Holland on bass, and legendary drummer Jack DeJohnette. Together they create an entire library of new music, expanding the reach of both ancient Eastern sounds as well as the jazz of the west. Incredible!

Equally incredible was Codona, one of the first world music/jazz supergroups, 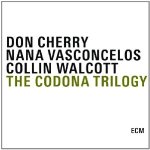 which found Walcott playing with trumpeter Don Cherry and the great Nana Vasconcelos. Simply indescribable, the box set Codona Trilogy  collects all of their recorded work, and you really haven’t heard anything like it. Trust me, any group that somehow manages to make a piece from two Ornette Coleman tunes coupled with Stevie Wonder’s “Sir Duke” is beyond compare. Enjoy!