This isn’t the sort of thing I usually do.  With my fondness for all dairy products, I’ve never seen the need to try to make substitutions, but the idea of this raw cheesecake made from cashews piqued my curiosity.  It was hard to imagine that soaked raw nuts could be turned into anything comparable to cream cheese – and vegan?  Not my style.

So, I made this.  It is not bad!  In fact, it is very tasty and certainly is more than an adequate substitution for those no-bake, quick “cheesecakes”.  The crust was amazing, no matter what filling might be placed in it.  The filling was creamy, not too sweet, and had a great consistency and flavor.  However, real cheesecake it was not.  (As a friend remarked to me this week, I am a food purist.) I would make it again, if I need a quick dessert – and especially if I need a dairy-free dessert for someone with special dietary needs.

Most of the recipes I found required freezing the cheesecake, but my freezer is chock-full so that wasn’t going to happen.  I instead combined bits and pieces of several recipes and changed up some ingredients make it work in the refrigerator.  About some of the ingredients and equipment:

Artisana Coconut Butter: This is not the same as coconut oil, because it also contains coconut pulp and seems to be more dense than just coconut oil.  When I warmed it up, I discovered that it has the most wonderful consistency – like sweetened condensed milk.  Yum!  You can substitute regular coconut oil, but your cheesecake may be a little less firm.

Gluten-free Cookie Crumbs: I happened to have some gluten-free gingersnaps in my pantry.  These cookies were exceptionally dry and not very good for just eating, but they were perfect for making a crust.  These ginger molasses cookies would also work. *Just leave out the cream cheese and increase the baking time to make them more crispy.  If you don’t want to bother with the cookies, add another cup of nuts instead.

Blender: I would recommend using a high-power blender, such as a Vitamix or Blendtec, for making the filling.  A food processor isn’t going to blend the nuts to a ultra-creamy consistency, but it will still work in a pinch.

Spring-form pan:  I used a spring-form pan for the cheesecake, lined with parchment paper.  After letting it set in the refrigerator, it easily released from the pan and slid off the parchment paper onto a serving plate.  You could also use a 9-inch deep pie plate.

Raw cashews:  You have to set aside at least 4 hours for soaking the cashews in water.  Several recipes called for soaking them overnight, but I found that 4 hours was adequate.

Topping:  You can add any topping you wish, or none at all.  I combined a cup of blueberries with a little water and maple syrup, and cooked it over medium heat until the blueberries burst, then cooled it before topping the cheesecake.

Soak the cashews in water for 4 hours, or up to overnight.  Drain and rinse well before using. 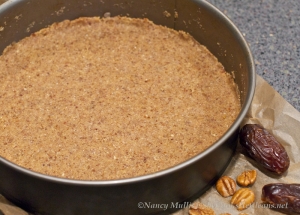 Add the crust ingredients to a food processor and process until well combined with no large lumps.  Avoid over-processing, because you want the crust to have some nutty texture to it.  Line the bottom of a 10-inch spring-form pan with parchment paper.  Place the crust ingredients in the pan, and spread evenly over the bottom.  Use a flat-bottomed glass (or other flat object) to press the crust down firmly in the pan.  Place pan in refrigerator while making the filling.

Add the soaked cashews, lemon juice, honey, coconut butter, coconut milk, vanilla, and salt to the blender.  Blend until completely smooth, scraping the sides down as necessary.  Add the batter to the pan, spreading it evenly over the crust.  Refrigerate until well chilled and set (at least 1 hour).

Serve with topping of choice.  Enjoy!

Just got finished reading Detroit Rock City by Steve Miller- great book- and it was full of the incredible music that once vital city gave to the world. Motown, Iggy, Bob Seger and two of my favorites. First up, Brother Wayne Kramer and the MC5. Punk before it was cool, outspoken and louder than hell, you can find a sampling of them on Big Bang. From “Kick Out The Jams” to “Rocket Reducer” and more, these guys were bad!

Equally talented were The White Stripes. Garage blues with a modern kick, Elephant is probably their zenith. With “Seven Nation Army” and “The Hardest

Button to Button” and more, this is primal stuff. Dig it!