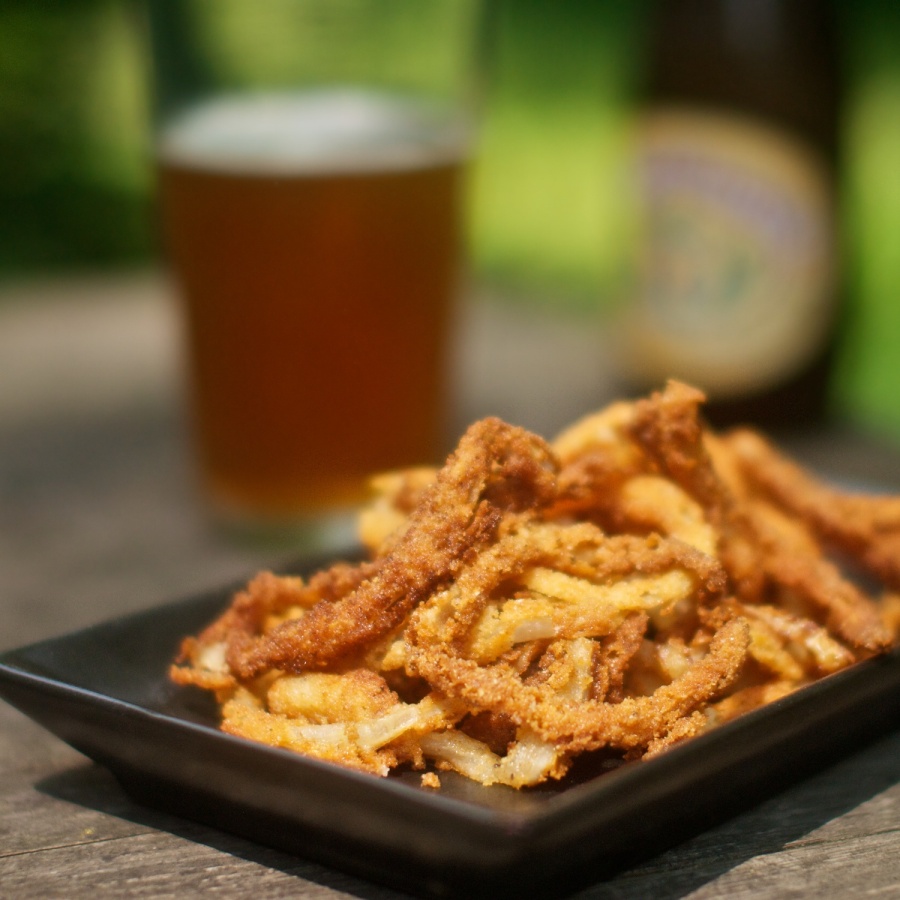 Modified from The Pioneer Woman 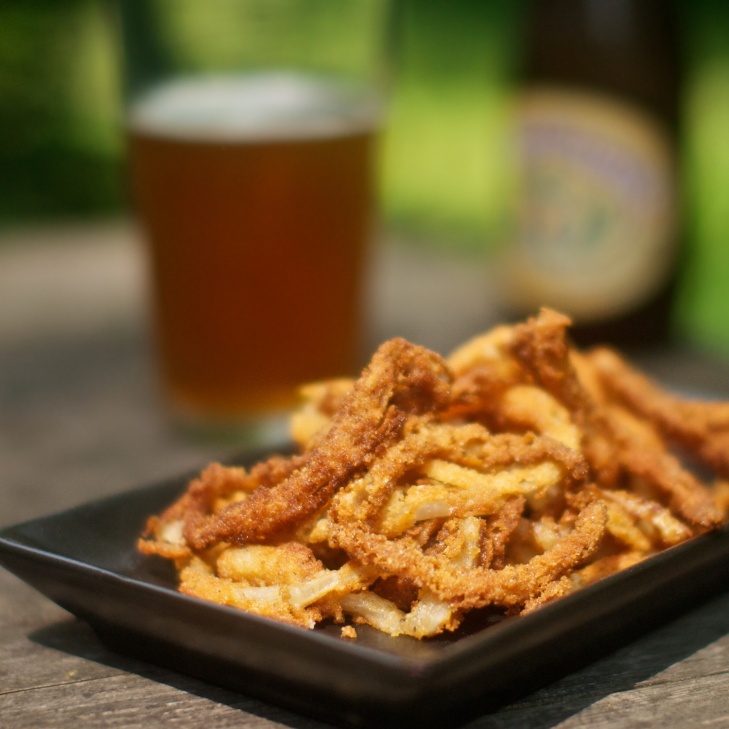 I have a confession to make – I completely suck at frying.  One might wonder why I’m even allowed to reside in Georgia, since fried chicken is the most hallowed food around.  Although several generations of my family were born in the southern part of the United States, including myself, I apparently am missing the gene responsible for being able to prepare fried foods.  I am truly dreadful at it – consequently, I just don’t fry things.  Ever.  It puts me in a horrible mood that ends with me tossing cooking implements down on the grease-soaked stove-top in exasperation and dumping oil-laden globs of burnt food in the garbage.  It’s an ugly scene.

I first got the inclination to try, again, to fry something around the time I started making zucchini strings.  I have delicious memories of zucchini fritti from a delightful West Village Italian Restaurant, Antica Venezia, which I was hoping to duplicate.  Delicate tendrils of julienne zucchini with a light batter, flash fried to a crisp. Then onion rings came to mind – thinly sliced, sweet onions with a spicy coating.  Now I’m really getting ambitious!

Another reason that fried foods have been off the table, aside from my ineptitude, is they generally are coated with flour containing gluten.  We are trying hard to eliminate gluten completely from our diet, since it contains anti-nutrients and, being indigestible by humans, provides unwanted irritation to the digestive system.  I’ve used almond meal as a flour substitute with success in other recipes, so I thought I would give it a try.  The other major ingredient in frying, the choice of oil, is something I still am struggling with.  After reading up on “good” and “bad” oils, I came to the general conclusion that there’s not a perfect choice for high-heat frying.  All the oils with high smoking points were flawed in some way.  I decided to go with Spectrum organic high-heat sunflower or grapeseed oils.  These oils are at least organic, 100% expeller pressed, and refined for high heat (up to 460F).

This recipe is adapted from The Pioneer Woman – the frying instructions were invaluable (and amusing…go visit)!  This recipe also works with zucchini strings!

Slice onion very thin.  Separate the rings and place in a shallow baking dish.  Cover with buttermilk and soak for at least an hour in the refrigerator.  (It’s okay if the rings aren’t completely submerged, they just need to have contact with the buttermilk.)

Combine the dry ingredients and mix with a fork; set aside.

Line a tray or large plate with lots of paper towels.

Heat the oil in a wide, heavy pan (such as a cast-iron skillet or a Dutch oven) to 375F.  A candy thermometer will come in handy here.  If you’ve got a deep-fryer, well, good for you!

Throw a handful of onions in the flour mixture and toss around to coat the onions pretty well.  Shake off excess flour, and plunge them into the hot oil.  Carefully!  Don’t burn yourself!  Stir the onions around a little, fry for a few minutes, then remove them as soon as they are golden brown. Place the onions on the paper towels to soak up the excess oil.

Repeat using small portions of onions until they are all done.

[Aside – Help me, I am still doing this wrong!  The first 2 or 3 batches are lovely, but after that everything starts going downhill.  My flour starts getting wet and won’t stick to the onions.  If I correct that problem, the oil seems to either be too hot or not hot enough, or foamy…the fried onions get too dark, or they all start globbing together.  Should I be adding more oil?  I need frying pointers!] 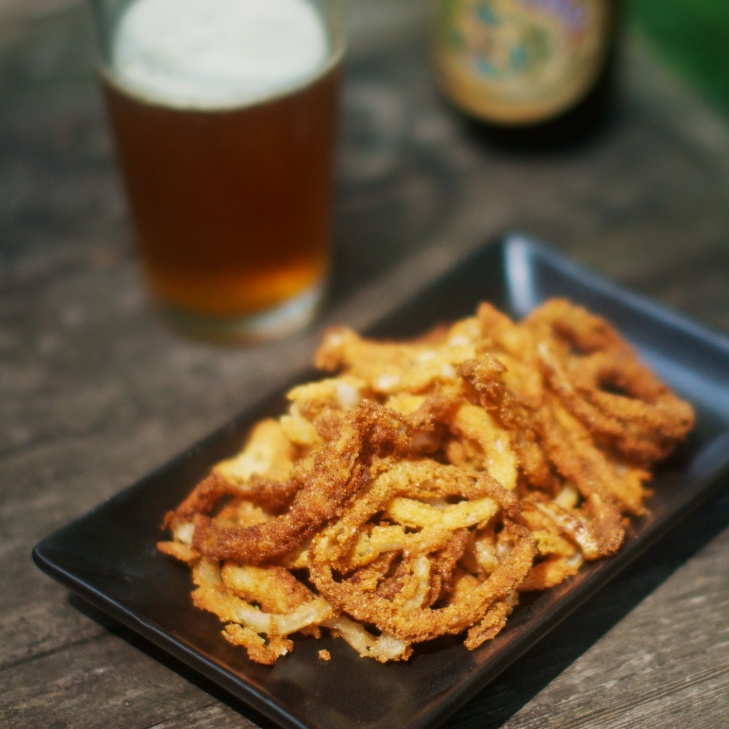 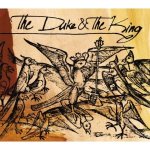 I know I lean toward older music here, forgive me, but I’m pretty much of the “Hey you kids! Get off my lawn!” generation when it comes to music, but I occasionally listen to music released within the last few years. First up is a record that hasn’t even come out yet…how new is that! Formed by a former member of the Felice Brothers, The Duke & The King

is in the running for my favorite of the year so far. This is a beautiful, soulful record that manages to invoke everything from Neil Young to Stax, Gram Parsons to Soul Coughing, while being utterly original. Can’t stop spinnin’ it!

. I’m a sucker for “chamber pop”; the mixture of strings and rock, and this is a grand example, with the songs of Ari 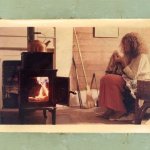 Picker woven thru with cellos and such. Gorgeous!