Modified from Bon Appétit via Epicurious

Here’s another cut of meat that I was unfamiliar with – the beef tri-tip roast.  It’s a small triangular muscle cut from the bottom sirloin, hence its other name, the “triangle roast”.  Although a very flavorful piece of meat, it is pretty lean and should be served cut into thin slices across the grain to preserve the tenderness – at least that’s what I read about it.  Everything I read seemed a warning that this could turn into a chewy hunk of meat if you don’t treat it just right.  Scary!

I decided to marinate it to infuse more flavor, and to cook it at high heat for a short amount of time to keep it moist and tender.  I was apprehensive, I admit…but man-oh-man, this turned into the best roast beef!  It was tender, juicy, and had the most wonderful flavors from the lime, garlic, and cilantro – plus a nice crust on the outside.  To accompany it, I made a “relish” of caramelized onions, red bell peppers, parsley, and sun-dried tomatoes – with a little harissa stirred in for a touch of heat.  A few slices of oven-roasted zucchini completed the meal.  I love it when a meal that I felt daunted by transforms into a medley of tastes that seem born to be together.  This was one of those meals!

Place all the ingredients, except the roast, in a small food processor or blender.  Process until well-blended.  Place the roast in a resealable bag.  Cover with the marinade and refrigerate at least 2 hours, but preferably 6 hours, turning the bag occasionally (you probably can do this overnight, but I didn’t try it so can’t recommend doing that).

Preheat the oven to 425F.  Allow the roast to come to room temperature in the marinade before cooking. Remove roast from bag, and season lightly with salt and pepper.

Heat a heavy skillet (cast iron is good) to a searing heat (hot hot hot!).  Add a thin layer of oil to the pan, then sear the roast until well-browned on the underside, about 4 minutes.  Turn the roast over and transfer the skillet to the oven.  Roast until the center of the meat registers 125F on an instant-read thermometer (20-25 minutes).  Remove from oven and let meat rest on a cutting board for about 15 minutes.  The internal temperature of the meat should rise to 130-135F during this time for medium-rare.

[Alternatively, the meat can be grilled at medium-high heat (around 400F) for 10 minutes on each side, or until temperature in the center of meat reaches 125F as above.  We may try this next time, but this week we were too weary to fight the hordes of blood-thirsty mosquitoes.]

To serve, slice thinly across the grain of the meat.  Serve with or without onion relish – it’s all good!  Enjoy! 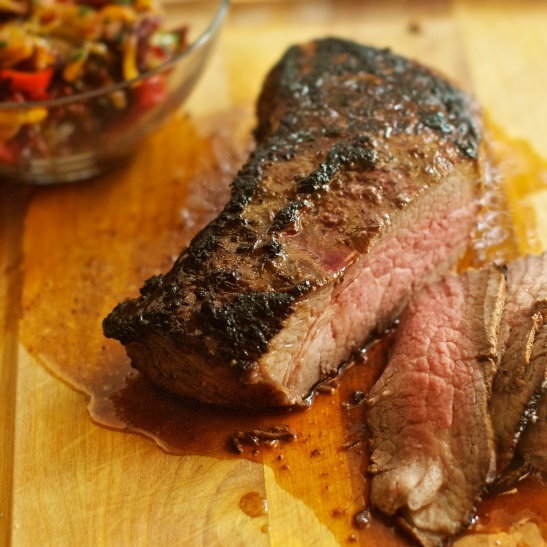 Let’s rock the Fillmore, shall we? One of those places I wish I could have visited, but alas, I was but a wee lad when they closed, but luckily, recordings remain, such as The Allman Brothers Band at Fillmore East

. Improvisational rock at it’s live best, the pride of Macon GA created magic, and this is one of those live album benchmarks of all time. Duane, Gregg, Dickey and the rest…well, smokin’ indeed.

Humble Pie might not be as noted as the Allmans, but what a band. Featuring the leather-lunged vocals of Steve Marriott, and a young Peter Frampton proving that he could actually play rock and roll, something lost in the “Comes Alive” days. But the star here is clearly Marriott, whose 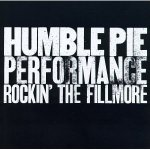 legendary career went from The Small Faces to blistering pub rock, the pint sized Brit sang like an angry Aretha Franklin, and wrote some incredibly forceful material. Give “I Don’t Need No Doctor” from Rockin the Fillmore

a spin and if you aren’t bobbin’ along…YOU might need a doctor!