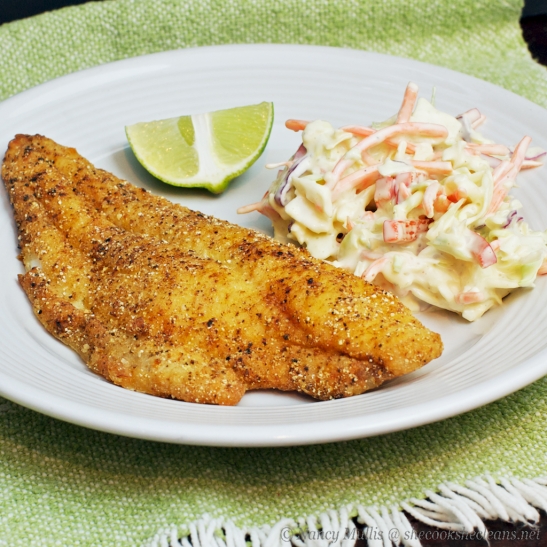 Here we are – with “Frying, Revisited”.  As I’ve mentioned before, I’m not much of a fry cook.  The last effort ended with a smoky, greasy mess in the kitchen – and that was just me!  However, I’m glad I made another attempt because this catfish was “right tasty”, as Southerners might say.

We wanted to try something different from the fish counter, and neither of us could remember having catfish before.  Since catfish may be the mostly widely eaten American fish, we may be mistaken.  Regardless, I picked up a few fillets at Whole Foods and decided to fry them up with a light coating of seasoned cornmeal.  I wasn’t sure what to expect, flavor wise, but was pleasantly surprised with how creamy and mild the catfish tasted.  Beyond the salty, crispy crust, the fish was sweet and soft as butter – a delicious contrast.  We enjoyed it so much that a repeat performance was requested and served up this week!

This isn’t something that we’re going to eat every week (sorry, sweetheart), but it’s nice to have as a treat every once in a while!  Be sure to soak the fillets in buttermilk (or whole milk) first, because it really improves the flavor of the fish.  Freshwater fish sometimes have a “muddy” flavor, and the milk will neutralize or wash out that undesired after-taste.  (I’m not sure how it works, but I tried catfish with and without the buttermilk.  The marinated catfish was definitely creamier, moister, and better tasting.)

Rinse and dry catfish fillets, and place in a glass baking dish.  Pour buttermilk over the fish (they don’t need to be completely submerged, but use enough buttermilk to make sure all the fillets have good contact with the milk.)  Marinate for one to two hours in refrigerator, turning the fish once.

To another shallow plate or baking dish, add the cornmeal and generously season with salt and pepper.  If you thought you were generous, go back and add more salt and pepper.  (I didn’t measure, but some recipes suggest 1-2 teaspoons of salt and 1/2 to 3/4 teaspoons of pepper.)  Add several good shakes of Old Bay Seasoning.  If you’d like a little spiciness, add some cayenne pepper.  Mix well.

Remove the catfish fillets, one at a time, from the buttermilk.  Allow the excess buttermilk to drip off the fillet, then roll in the seasoned cornmeal.  Place the cornmeal-coated fillets on a clean plate and allow to dry for about 5 minutes.  (Yes, this recipe dirties up a lot of dishes.  I hope you have a good cleaner-up like “He Cleans”!)

Preheat the oven to 150 degrees (or lowest setting).  Place a heat-proof tray, lined with paper towels, into the oven.  (Do not put paper in the oven if there’s an open flame in there, however.  Safety first!)

Using a large, heavy skillet (cast-iron is best), add enough oil to cover the pan 1/4 to 1/2-inch deep.  Heat until very hot – a morsel of cornbread dropped in the pan will sizzle.  Add two of the fillets and cook 2 to 3 minutes per side or until nicely browned.  Place the cooked fillets in the oven on the paper towels to keep warm.  Repeat for the last 2 fillets.

Serve hot with a squeeze of lemon or lime juice and creamy cole slaw!  Enjoy! 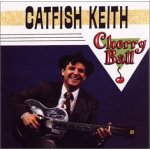 Like some blues with your catfish? Well of course! First up is a one of my favorite guitar players, Catfish Keith with his 1993 album Cherry Ball

. Keith is a delta blues player, and his takes on classics such as Blind Willie Johnson’s “By and By I’m Going To See The King” or the ribald “Rabbits in Your Drawers” show off his fingerstyle guitar picking expertly.

Next is Adventures at Catfish Pond

from Bob “Catfish” Hodge. On it the long-time bluesman aims for the little folk with a children’s record, and with songs such as “Pancake Man” or “Dreamy Time Time”, he creates a winning

album that won’t have you flinging the disc across the room after your kids play it for the fifth time!