Chicken with Mushrooms and Grapes 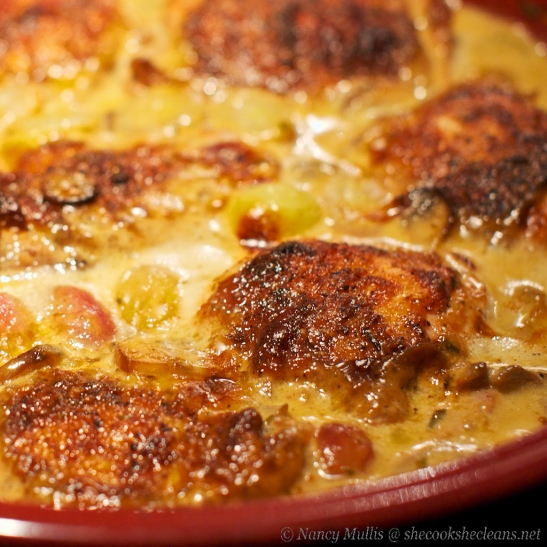 Chicken in a casserole dish doesn't photograph well, but you get the idea...

Suddenly it is almost dinner time, and I haven’t the faintest idea of what I’m going to cook.  This is an opportunity to take inventory of what is in the refrigerator, then google it and see what you come up with.  It is food roulette  – there are hardly any ingredients that someone hasn’t thought to combine and pass off as a new and exciting dish.  Some of those combinations are misguided. There is also a jungle of recipe sites out there loaded with the “can of cream of mushroom soup” casseroles – they’re not all bad recipes – they just need some updating with fresh ingredients instead of thickeners, preservatives, and artificial flavor enhancers.

I was vaguely looking for chicken baked in a mushroom sauce, with some sort of fruit added to perk it up – and I found a few recipes that had grapes.  Hmmm….I like chicken salad with grapes, so this seemed to be a promising idea.  The recipes I found seemed to be rather bland, however, and one included the unfortunate choice of red wine in the sauce, which reviewers reported caused the color of the chicken to be unnaturally purple.  Yum?  We can fix those problems!

This recipe fit nicely in the tagine

, but would work equally well in any baking dish.  We enjoyed the saucy chicken with roasted vegetables; it could be served over noodles or rice as well.  The grapes are only heated until warmed throughout, so they add a fresh burst of clean flavor that contrasts well with the rich mushroom cream sauce.

Preheat oven to 375F.  Season the chicken thighs on both sides with salt and pepper.

Heat butter and olive oil in a heavy skillet over medium-high heat.  Brown the chicken thighs, on both sides, in batches, so not to crowd the skillet.  Place the browned chicken in a casserole large enough to hold the chicken in a single layer.

Pour off all but 2-3 tablespoons of the hot oil in the skillet.  Saute shallot, stirring, for 1-2 minutes, then add the mushrooms to the pan.  Continue to saute, until the mushrooms are getting soft and have started to release their liquid.  (You can tell when this happens pretty easily – the mushroom initially adsorb all the oil in the pan, but after a while you will see liquid in the pan again.)  Reduce the heat to medium; stir in the wine and deglaze the pan by scraping up the browned bits from the bottom surface.  Add the broth and simmer for ~ 5 minutes, uncovered, allowing the liquid to reduce by half.  Stir in cream and herbs.  Season with salt and pepper, to taste.

If you would like to thicken the sauce up a little, use a measuring cup to scoop up a few tablespoons of the sauce.  Whisk the arrowroot flour into the measuring cup with a fork to make a slurry.  Add the slurry back to the skillet, stirring constantly to blend it in.  Cook over medium heat until thickened to desired consistency.  (It will be less thick after baking with the chicken, since the chicken will add more liquid as it is cooked.)

Pour the mushroom sauce over the chicken in the casserole dish.  Cover loosely with foil, and bake for 30 minutes.  Uncover, and cook for 15-20 minutes longer.  Stir in grapes, and bake until grapes are heated throughout (about 5 minutes).  Serve hot!

before his untimely death in 1979, but its a honey. From his take on “I Can’t Stand The Rain” to his “20 Million Things”, this is a romping exercise in soul.

One of the greatest blues albums ever, the late-50s release Two Steps From The Blues

from Bobby “Blue” Bland is 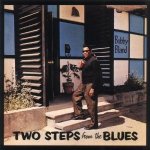 simply untoppable. Not as guitar oriented as his stuff with BB King, this is mellow soul blues from the master.

6 comments on “Chicken with Mushrooms and Grapes”