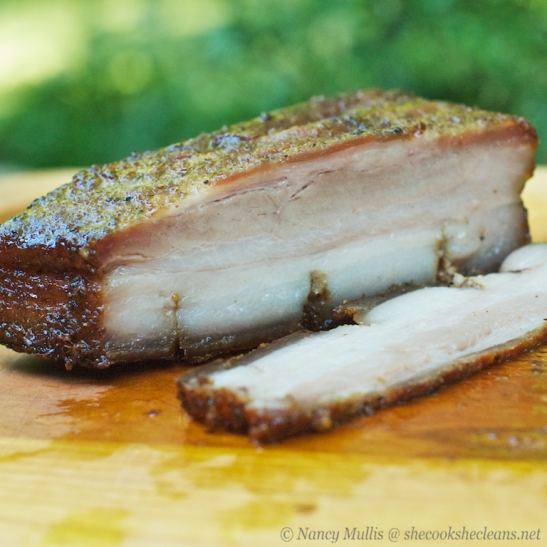 What a smoking weekend!  Determined to clear out some of the pork products in the freezer, we decided to get the Big Green Egg smoking most of the day Saturday with a pork shoulder roast (aka pork butt) and a pound of pork belly.  We’ve been getting pork belly every month in our CSA share from Moonshine Meats – so far we have only braised it, and I was ready for something different.  The Los Angeles Times had a recipe that caught my eye, and why wouldn’t it with the title “Maple-bourbon hot-smoked pork belly”.  YUM-MEE!

The recipe calls for a three-day brine, but I can’t be expected to think that far ahead.  Our pork belly was in the marinade for a bit longer than 24 hours, and although a longer brine would no doubt increase the flavor, it nevertheless had the sweetly subtle taste of maple and bourbon.  After hours of sitting on the porch with tantalizing wafts of whiskey-barrel-spiked smoke passing by our noses, as soon as the pork belly was done we were unable to resist slicing bits off and eating it with our greasy fingers while we waited for the pork butt.  What a great appetizer – melt in your mouth tender, sweet and smoky!  What we didn’t snack on is destined for another meal, and I am looking forward to it.

One note about preparation of the pork belly – the LA Times recipe said to remove the rind (skin) before marinating, but instead I carved crosshatches in the skin and left it on.  In retrospect, I should have removed it because after smoking, the rind was quite chewy.  It is easily trimmed off after smoking, although some of the flavor is trimmed off with it. Live and learn! 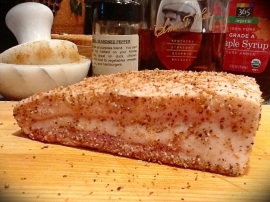 Wash and dry the pork belly.  Carve crosshatches into the top fat layer, and rub in some of the toasted, crushed mustard seed, coriander, and black pepper.  Place the pork belly in a resealable plastic bag.

In a small bowl, combine the remaining mustard seed and coriander with more black pepper and the maple syrup, bourbon, and salt.  Pour the marinade in the bag and massage it into the pork belly.  Press the air out of the plastic bag and seal.  Refrigerate for at least 24 hours up to 3 days; remix and turn the bag over occasionally.

Prepare the smoker to cook at 225-250 degrees (F).  (On the Big Green Egg, be ready to use the plate inverter, feet up, with a drip pan and grill rack.)  When the coals are ready, throw in the wood chips.  Remove the pork butt from the marinade and set up on the grill, fat side up, over a drip pan.  Close the smoker and let it go for at least 2 hours before peeking in on it.  Keep the temperature of the smoker around 225 degrees.  Smoke the pork belly until the internal temperature reaches at least 150F, per the LA Times recipe.  We took our pork belly to around 170F, which took 4-5 hours. (I forgot to time it….sorry!)  The time and temperature are likely not that important…I don’t think you need to worry about drying out this lusciously fatty piece of meat.

Remove from the smoker and allow to cool slightly.  Slice into thin slices, cubes, chunks, or however you like it!  Refrigerate leftovers.

Nothing beats Grill Day…sitting there smelling the heavenly aroma…but new music day is nearly its equal! Picked up some new releases recently. First up is Ray Wylie Hubbard’s The Grifter’s Hymnal

. Ray is a Texas songwriter, a little bit more rocking than most. He’s been around forever- he wrote the classic “Up Against The Wall, You Redneck Mother” in 1973- and his wordplay and musical instincts have rarely been sharper than on his new album. From “New Year’s Eve At The Gates Of Hell” to “Coochy Coochy” with Ringo Starr, this is fine waiting on the pork to cook music!

As is Leaving Eden