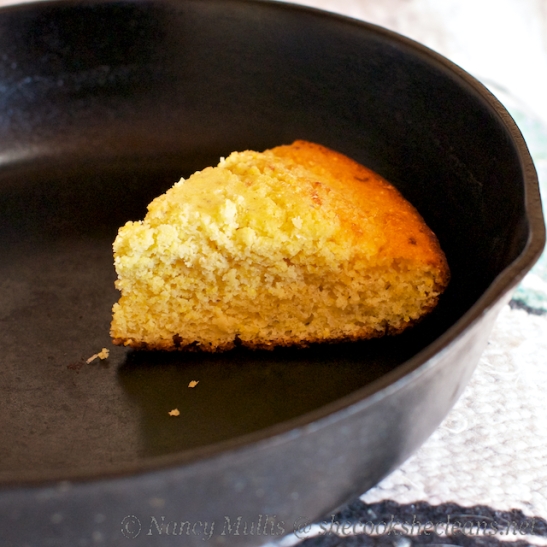 Every good Southern cook probably has a prized recipe or two for cornbread.  I like mine buttery, slightly crumbly but not dry, with a touch of sweetness and a crispy crust.  I adapted this recipe for gluten-free cornbread from one of my favorite cookbooks, Tom Douglas’ Seattle Kitchen.  Tom Douglas is a big time chef and restaurant owner in the Pacific Northwest, and James Beard Award recipient, but he has Southern roots that show through in many of his innovative recipes.  I love this cornbread – it is great on its own with a bowl of chili, or dress it up in his recipe for Cornbread Pudding – a dish that you won’t soon forget.  (You will probably see me posting it around Thanksgiving, if you don’t have the cookbook.)  Although I changed it the recipe to make it gluten-free, we couldn’t tell the difference!

I don’t remember where I learned this, but one secret for a crispy crust on your cornbread is to cook it in a cast iron skillet.  While you do the final mixing of the ingredients, heat the skillet on the stove or in the oven until it is searing hot – quickly throw in some oil or butter and swirl it around to coat the pan (but don’t burn it), then pour the batter into the hot pan and put it in the oven.  The hot cast iron gives the crust a head start.

Update 11/18/2014: I’ve been experimenting with this over the last couple of weeks, storing up cornbread to use in stuffing for Thanksgiving. As I’ve learned with other gluten-free recipes, gluten-free flours do not adsorb liquid the same way as conventional flour. One way around that is to substitute something for some of the liquid.  Today I used sour cream to substitute for about a third of the milk.  The “tang” from the sour cream added a nice flavor, and I think improved the texture too (the crust seemed crispier).  I have altered the recipe so I’ll remember to use sour cream in the future!

Whisk eggs and wet ingredients together in a measuring cup or small bowl.

Heat a  8- or 9-inch cast iron skillet over medium-high heat until searing hot.  Add a pat of butter and quickly swirl around until melted.  Pour the batter into the hot pan over the heat.  Smooth out so that batter covers pan if necessary.  Place skillet in oven.  Bake until browned on top and a toothpick inserted in the center of the cornbread comes out clean (around 15 minutes).  Let cook slightly, then invert to remove cornbread from the pan.  Slice it up and eat it, with more butter, if desired! 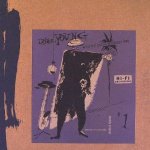 Smooth and delicious was the cornbread, so shall be the soundtrack! Two legendary musicians, Lester Young with Oscar Peterson Trio

with cuts such as “Stardust” and “I Can’t Give You Anything But Love”, a sublime recording. Try with the cornbread, you’ll see!

This entry was posted on October 11, 2011 by She cooks...He cleans in Side dishes and tagged almond flour, bread, corn, cornbread, Etta, gluten free, side dish, side dishes, skillet, Tom Douglas.