Modified from The Border Cookbook : Authentic Home Cooking of the American Southwest and Northern Mexico (Cheryl A. Jamison and Bill Jamison)

One of our favorite places to eat in Santa Fe is Maria’s New Mexican Kitchen.  Maria’s is primarily noted for their VAST selection of margaritas crafted for every tequila out there.  In fact there is a book devoted to the margarita recipes, which naturally, we had to have a copy of.  The food to accompany those margaritas is authentic New Mexican fare and is equally delicious.  We love the carne adovada, as well as the spicy-sweet short ribs, garlic-butter steak, chile rellenos – or if you’re really hungry, the combination plate.

So, with that inspiration, here is our version of carne adovada.  It’s a little messy, with preparing the chile sauce…it takes some time, with an overnight marinade of the meat and a slow cook on the next day.  However the end result is tender chunks of pork enveloped in a spicy red chile sauce, which despite the heat, has many layers of flavor.  The amount of heat will depend on what type of chiles you use.  I like to use a combination – ancho chiles are pretty mild, and New Mexico chiles are fairly hot, but aren’t going to take the skin off your lips.  Beyond that, you’re on your own! Here is a good source for chiles: http://www.thespicehouse.com/spices-by-category/chiles.  You can also make the chile hotter, if you’re that brave, by using some of the seeds from the chile pods in the sauce.

Serve this dish with a cooling salad, sliced tomatoes, avocado, some cornbread or tortillas – and even a bit of sour cream and grated cheese if you’d like.

De-stem and de-seed chile peppers, and break them into small pieces.  (Note:  If chile peppers aren’t dry enough to break up, you can roast them first in the oven on a baking sheet at 300F for 5-10 minutes, watching them carefully so they do not burn.)  Place the chile pepper pieces in a large pot with the remaining ingredients (except the pork), and simmer, covered, over low heat for 30 minutes to an hour.

Remove from heat and allow to cool slightly.  Puree with a hand blender, or process in a blender or food processor in batches.  At this point, you can strain the red chile sauce through a wire sieve for a smooth sauce, or use “as is” for a chunkier sauce.  Add additional broth or water, if needed, to get the desired sauce consistency.  (The sauce in the photo above is not strained.)

Place the pork in a non-reactive bowl or deep baking dish.  Cover with the red chile sauce and refrigerate overnight, or up to 48 hours, stirring occasionally.

Bring the mixture back to room temperature before cooking.  The carne adovada can be cooking in a crockpot/slow cooker on low (4-6 hours), or in a 350F oven, covered, for 3-4 hours.  If cooking in oven:  Preheat oven to 350F.  Transfer to a Dutch oven or heavy pot with a cover.  Bring to a simmer on the stove-top, then transfer to the oven.  Stir occasionally, until meat is fork tender and the sauce has cooked down.  Serve hot. 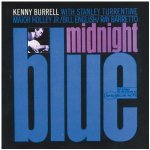 , a “soul jazz” classic. Burrell has a gift of tone and phrasing that makes him unmistakable, and this is one of his best.

Next, the late, great Stevie Ray Vaughan on a collection called The Sky Is Crying

featuring his take on Lonnie Mack’s “Wham”, Jimi Hendrix’s “Little Wing, and a cut from Midnight Blue “Chitlins Con Carne”. Hey, you try and come up with music for Carne Adovada!