From The Fearrington House Cookbook: A Celebration of Food, Flowers and Herbs by Jenny Fitch 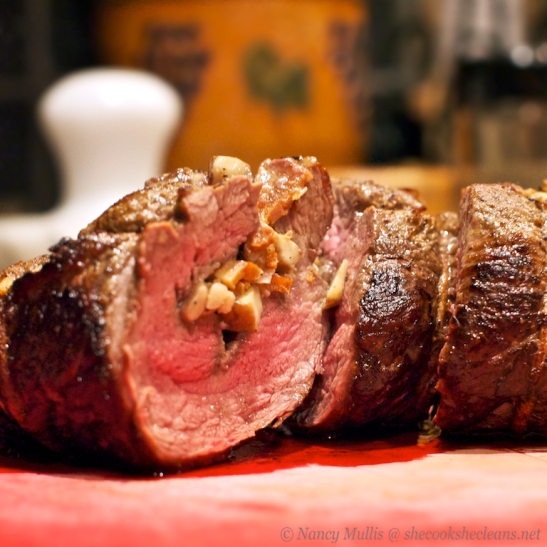 Valentine’s Day is coming up, and I know many of you are looking for something really special to surprise your sweetheart.  Well, if the love-of-your-life also loves red meat, I promise that he or she will swoon over this recipe.

The Fearrington House Inn and Restaurant is just outside of Chapel Hill, NC.  If you get a chance to visit, you will find it at the center of it’s own country village – surrounded by green pastures and Belted Cows.  The Fearrington experience is the epitome of Southern grace, elegance, and hospitality.  I bought The Fearrington House Cookbook more than 20 years ago with dreams of living in a sunny cottage in the country with open windows, gardens bursting at the seams with wildflowers and herbs, making my own dried flower arrangements, wreaths and herb-infused oils, and serving miniature ham biscuits to friends that dropped by for tea.  Ha!  I guess I forgot that I’m not independently wealthy and have to work for a living, not to mention I can’t even keep houseplants alive.

Well, enough about the delusions I had in my 20’s.  (My current dreams involve an adobe house, but otherwise aren’t all that different.  There’s always hope!)  Regardless, this cookbook has a wealth of information and a multitude of fine recipes.  This recipe for Roast Tenderloin is a favorite – readily identified by the pages with the most food splatters on them.  What really makes this recipe extra-special is the velvety, creamy, caramel-y sauce, so don’t even think about skipping it. There will be some leftover sauce, if you can restrain yourself from tasting it over and over.  It is also great on pork!

Enough rambling….here’s the recipe, scaled down a little for a cozy romantic dinner (and leftovers) .

Combine orange juice, Madeira, port, and brandy in a saucepan and bring to a boil.  Reduce heat and simmer until reduced by half.  (Note: To easily gauge how much the sauce has reduced, I stick the handle of a wooden spoon, straight up, into the pan, then make a shallow gash in the wood to mark the liquid level.  The sauce may boil around the stick, so you have to let the boiling settle before determining the level.  I then use that mark to determine when the sauce has been reduced by half.)

Add beef stock and reduce again by half.  Add cream and reduce by half.  Set aside.  (This takes some time, so be patient.) 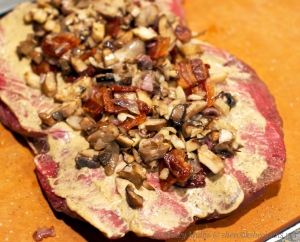 Butterfly the roast by making a deep incision down the length of the roast so that the meat opens (like a book) and lies flat.  Salt and pepper the inside of the roast, and spread with Dijon mustard.

Saute the mushrooms in the pan with the bacon drippings until the mushrooms are beginning to soften.  Add garlic and shallots; continue to cook for another minute.  Remove from heat.  Add the cooked, diced bacon to the pan and mix.

Spread the bacon mixture down the center of the roast.  (All of the mixture might not fit in the roast, depending on size of roast.  It’s pretty good to eat out of the pan.)  Roll the tenderloin to its original shape and tie with butcher’s twine at 1-inch intervals.  (It helps to tie both ends first, then the middle, to keep the stuffing from falling out.  However, it will fall out while you are doing this.  Just poke it back in once you have finished tying the roast.) Season the outside of the roast with more pepper.

In a large skillet, heat oil over medium-high heat.  Add the roast and sear on all sides until nicely browned.  Remove the roast, and place it seam-side-up in a roasting pan with a rack.  (Note: the roast may be prepared to this point earlier in the day and set aside, covered, at room temperature until ready to be finished.)

Preheat the oven to 450F.  Place the roast in the oven, and immediately reduce the temperature to 375F.  Roast until internal temperature is 125-130F (medium-rare), around 20-30 minutes depending on size of roast.  Remove the roast, cover, and allow to rest for 10 minutes.

Bring the sauce to a boil and adjust seasonings.  Remove from heat and whisk in butter, 1 tablespoon at a time.

Slice beef  into approximately 1-inch slices, and serve with the sauce.

, one of the most treasured recordings of Coltrane. His playing is subdued and emotional, but never steps on the rich vocals of Hartman. Even those who wrinkle their nose at jazz love this record. 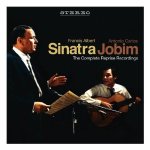 Can’t have Valentines without Sinatra! And this one, Sinatra/Jobim: The Complete Reprise Recordings

, was created during the heyday of bossa nova in the ’60s, and it hasn’t lost a bit of its understated brilliance since. When Frank croons “Quiet Nights Of Quiet Stars” against Jobim’s soft guitar, its heaven.

11 comments on “Roast Tenderloin of Beef with Madeira Sauce”