Modified from The Splendid Table: Recipes from Emilia-Romagna, the Heartland of Northern Italian Food, by Lynne Rossetto Kasper 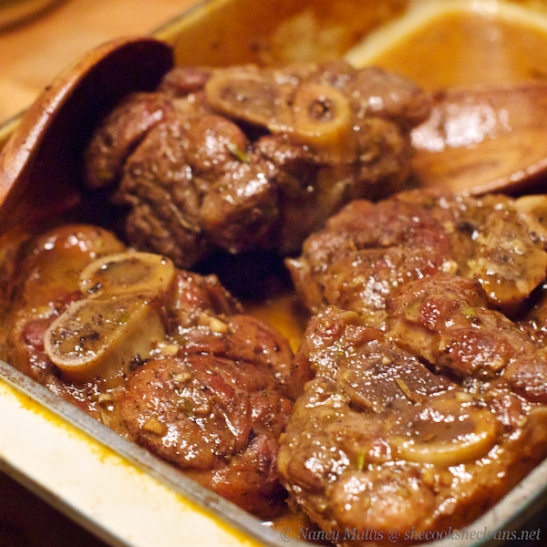 Pasquale Palazzolo (Pat) from the blog Fatass to Badass (F2BBlog.com) asked if we would be interesting in doing a guest post, to which I replied “certainly”!  I’ve been following Pat’s progress for a while now – here’s a man who started out at 388 pounds and has changed his life with a Paleo/Primal lifestyle.  He has lost over 100 pounds now and is still going strong because he is eating healthy food and exercising.  Pat finished in The Disney Half Marathon and Warrior Dash just last month!  That qualifies him as a Badass in my book!

In honor of Pat’s Italian heritage, I decided on a recipe from a wonderful cookbook, The Splendid Table: Recipes from Emilia-Romagna, the Heartland of Northern Italian Food, by Lynne Rossetto Kasper.  The recipe entitled “January Pork” was written for a pork loin roast, but I have adapted it to use pork shank, or ossobuco.  The great thing about using this cut of meat is that the nutrients from the bone marrow are released during the long, slow cook.  The marrow also adds to the rich taste in this braised dish.  If you have a local pork supplier or butcher, ask if they can provide you with fresh pork shanks, cut into 2- to 3-inch sections.  Pork shanks are much less expensive than the traditional veal shanks used in most ossobuco recipes.  [Be sure to get fresh, not cured, pork.  Cured pork shanks (aka ham hocks) will not work in this recipe.]  Our pastured-raised pork shanks came from Heritage Foods USA.  If you can’t find pork shanks, do not despair!  This recipe should also work with thick, bone-in pork loin chops.

This pork ossobuco requires some planning ahead, with a 24-hour marinade time and 3 hours of cooking.  However, most of the time involved is “hands off” time, so don’t let that dissuade you from trying this recipe.  Believe me, it will pay off in the end with a delicious and impressive meal! 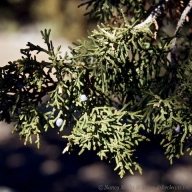 The braised meat and sauce has a delicate, indescribable flavor from the marinade – sort of a sweet and subtle spiciness which complements the pork without overwhelming it.  Pork Ossobuco is great served over roasted or mashed cauliflower.  It could also be served over polenta, mashed potatoes, or pasta, for people that aren’t following a primal diet.

A crazy side story… this recipe calls for juniper berries in the marinade.  We were in Santa Fe at the time, and there were no juniper berries at the market.  However our house is surrounded by juniper; in fact, the landscape is dominated by this shrubby tree.  Could I harvest the shriveled, dark blue berries from our yard?   Results from Google varied from “North American juniper berries may be toxic and/or bitter”, to “okay to eat for survival in the wild”.  Well, not comforting enough for me.  I posted the question on facebook and my Southwestern friend Annie came through with a decisive-sounding yes, she has eaten these berries.  So, with faith in Annie’s knowledge, I picked a nice handful of berries and used them for this recipe.  The pork turned out great – however, for a more accessible source of juniper berries, click on the link below in the ingredient list!

Combine the olive oil, juniper berries, garlic, cloves, and black pepper in a small food processor or blender; process until finely chopped.  Alternatively you can crush the ingredients together using a mortar and pestle (which is what I did – no food processor available at the time).  Place the pork in a non-metallic dish large enough to hold it snugly.  Rub the pork on all sides with the spice mixture.  Cover the dish with plastic wrap, and refrigerate for 18 to 24 hours.

Remove the pork from the refrigerator and allow it to come to room temperature before cooking (at least 30 minutes).  Preheat oven to 325F.

Lightly salt the pork with kosher or sea salt.  Heat 2 tablespoons of olive oil (or lard) in a Dutch oven over medium-high heat.  (Hold on to the dish with the marinade.)  Brown the pork shanks on both sides; set aside in the marinade dish.  Pour off the excess fat from the pan and discard.  Place the pan back over medium-high heat and carefully pour in the wine and 1/2 cup of the chicken broth (it will madly steam and boil at first).  Deglaze the pan by loosening the browned bits from the bottom of the pan with a wooden spoon.

Return the pork to the pan with its juices and any remaining marinade left in the dish.  Add more chicken broth to the pan, to nearly cover the pork shanks.  (Amount will vary depending on size of pan and amount of pork.)  Tuck in the bay leaf, cover, and braise for 2 1/2 to 3 1/2 hours.  Check on the pork occasionally to assure that there is still liquid in the pan.  Add a little water or broth if the pan juices threaten to burn.  Toward the end of the cooking time, leave the lid partially off so that the liquid will reduce somewhat (if needed).  The pork is done when it is tender enough to cut with a fork.

Remove the pork ossobuco from the braising pan to a serving dish.  Remove bay leaf and discard.  If necessary, boil down the braising liquid to a saucy consistency. Season the sauce to taste with salt and pepper.  Pour the sauce over the pork, and serve immediately!

Proliferation of juniper in our area of New Mexico

It was a sad day on December 4th when Hubert Sumlin died of heart failure, but he sure did leave behind a lot of great music! I saw him sitting in with Son Seals years ago, and boy could he bring it. Sumlin was Howlin’ Wolf’s guitarist, and did as much as anyone in defining the electric blues sound from Chicago. Keith Richards and Eric Clapton led a tribute concert at the Apollo Theater the other night that I wish I could have been there.  If you missed it as well, here’s a few selections to hip you to what all the fuss was about. First, Hubert’s final solo album, About Them Shoes

What can you say about my favorite blues vocalist, Howlin’ Wolf? Along with the stinging, melodic guitar of Sumlin, the Wolf was the most fearsome, awe inspiring bluesman I’ve ever heard. If Moanin in the Moonlight 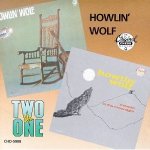