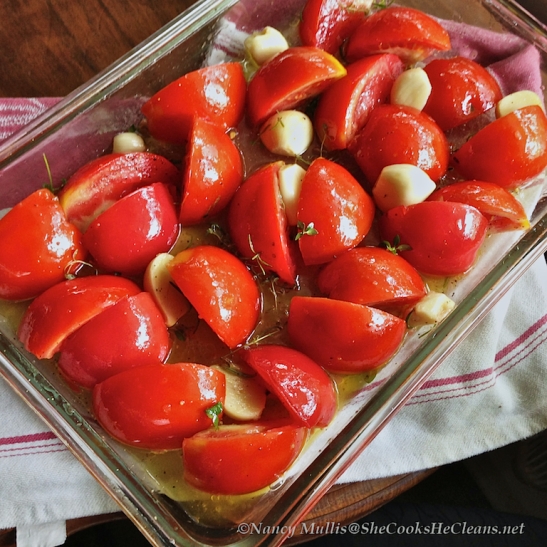 Tomatoes are starting to roll in, and not even I can keep up with eating that many BLTs.  One of the easiest and most versatile ways to take advantage of this is to oven-roast the tomatoes.  I love the super-concentrated, sweet taste of roasted tomatoes – and you can use them in a sauce, eat them straight up with some fresh herbs and a sprinkling of feta or sliced mozzarella, or freeze them for later use.

This is not so much a recipe as it is a method – you can change the ingredients up by adding different herbs, sliced onions – whatever you want to roast with your tomatoes.  The Vodka Sauce is but one example of a sauce you can prepare – I poured it over meatballs for a weeknight dinner.

You will need to use a non-reactive baking dish because of the acids in the tomatoes.  Also pick a dish that will hold the tomatoes without crowding them too much, so the tomatoes will roast, rather than steam in their own juices.  However, as they cook, they will shrivel up and open up some space.

When the weather is better, I’d like to try this in the Big Green Egg for smoky, fire-roasted tomatoes!

[*If using basil, I would suggest adding after roasting to preserve the fresh, delicate taste.]

Preheat oven to 325F.  Remove the stem ends from the tomatoes with a corer or small knife. Cut the tomatoes in large chunks (halving smaller tomatoes, quartering large tomatoes).

Add the olive oil, tomatoes, garlic, and herbs to the roasting dish.  Toss together and lightly season with salt and pepper.  Spread the tomatoes evenly throughout the dish.  Bake for around 2 hours, until the tomatoes are somewhat shriveled and caramelized around the edges.  Cooking time will vary depending on the tomatoes and how well you want them roasted.  (I prefer letting them going longer – they are more intense and sweet.)

Remove from oven and allow to cool.  You can keep the roasted tomatoes in the refrigerator for about a week, or freeze them. 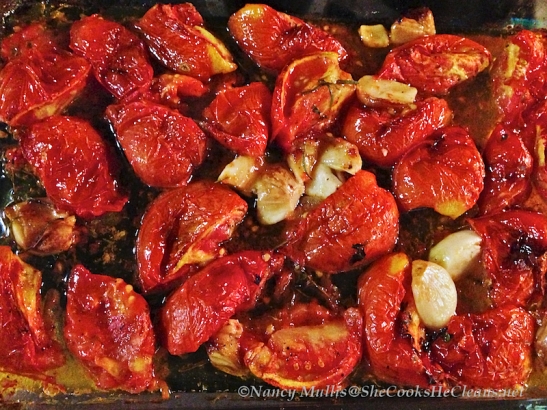 With my first batch, I made a Vodka Sauce for serving over meatballs.

Transfer the cooled tomatoes (with the garlic, olive oil, and browned bits from the baking dish) to a blender or food processor.  Add a pinch or two of red pepper flakes, if desired. Process well, adding a little more olive oil if necessary.  Add the vodka and continue to process until well-blended. (If the sauce seems too thick, dilute with a little broth or water.  If too thin, simmer until reduced in the next step.)

Transfer the mixture to a sauce pan and bring to a simmer.  Stir in the cream and continue to cook at a bare simmer, stirring, until warmed throughout.  Season to taste with salt and pepper.

Sorta hard coming up with tomato-themed music, but no fear, the better half of this team of course reminded me of…Little Feat with Waiting for Columbus

. Simply one of the best live albums ever, it shows Lowell George and Little Feat in all their funky glory. With cuts such as “Willin'”, “Tripe Face Boogie” and “Cold, Cold, Cold” if this record don’t make you wanna dance, then check your pulse…cause you’re dead!