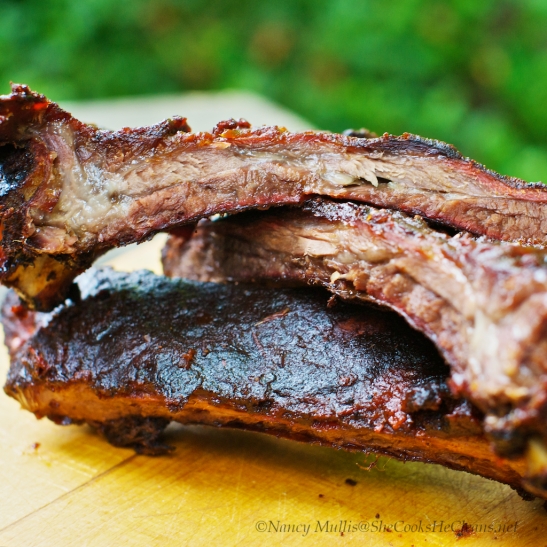 Smoking these gigantic beef ribs is not for the faint of heart – they are big and bad, as the title of this post says!  It takes some prep work, starting days ahead if your ribs are in the freezer.  Then on cooking day, plan on starting them fairly early because they need 6 to 8 hours to get to the tender stage that’s just right for eating.  However, it was SO worth the effort because these ribs had a great meaty taste that stood up well to the smoke, spicy rub, and barbeque sauce.

First, a bit about the ribs themselves.  These ribs are from U.S. Wellness Meats – pasture raised, grass fed beef with no hormones or antibiotics.  As I’ve mentioned recently, grass fed beef is rich in omega-3 fatty acids, and in conjugated linoleic acid (CLA), a proven cancer fighter, plus many other nutrients.  I am a rib fanatic, so when I saw these beef back ribs I knew I had to try them!  Please be advised, they are shipped from U.S. Wellness Meats in a 16 pound package.  This necessitated an afternoon of cleaning out our freezer – which is a good thing because there were quite a few unlabeled packages and containers that I’m pretty sure had been in there for 5 years.  There were probably 3 full racks, at least, in this package.  When they arrived, I partially thawed the ribs, repackaged them in smaller slabs of 4 to 7 ribs, and put them back in the freezer.  I’ll tell you now, I could barely fit a rack and a half (about 10 ribs) on our large Big Green Egg.  The good news is, we have lots more ribs in the freezer for another day!

The next step in the process, after allowing the designated ribs to thaw over 2 days, was to remove the tough membrane from the back of the ribs.  This is important because that membrane keeps the spice rub from permeating the meat, and it also is inedible, rubbery and unappealing.  It’s a little difficult to remove it, but if you’ve taken the membrane off pork baby-back ribs, it’s the same principle.  Using a dull knife (or screwdriver), loosen the membrane on the underside of a rib (one near the end of the slab).  Pry it up, then use a paper towel to get a good grip on it, and pull it away from the ribs.  If you’re lucky, you can get it to come off in a big sheet – but if it breaks, just find another place to pry it up with the knife and start over.  You don’t want to leave any of it on your ribs!

The night before you plan to cook the ribs, rub them all over with a good dry rub.  (If you’d like, smear the ribs with plain mustard, then apply the rub.)  From my “research” on cooking beef ribs, I learned that it is better to use a rub with less sugar than you would usually use for pork ribs.  After reading tons of recipes, I put this rub together for our ribs.  Also, unless your ribs are really meaty, go light on the rub or it will be overwhelming.  Wrap the seasoned ribs in plastic wrap and refrigerate overnight.

Beef Rib Rub:  (This makes more than you need for 1 1/2 racks – store extra in a glass jar with a lid, for next time)

On the Big Day, take the ribs out of the refrigerator about an hour before grill time.  They take long enough to cook without having to warm up in the grill!

In the meantime, get the grill ready for some smoking!  We used the Big Green Egg…a grill/smoker that I can not say enough good things about!  Fill the firebox up with lump charcoal – you won’t need it all since it burns slow, but there’s nothing worse than not having enough to last for 8 hours.  We set it up for indirect cooking at 225F, using the plate setter (legs up) and a disposable aluminum pan on the plate setter to catch drippings.

When the Egg is at temperature, throw in a couple of handfuls of hickory chips for smoke.  We used to soak these in water for 30 minutes before throwing them in, but I recently read that wasn’t necessary since the cooking temperature is so low.  Sure enough, they seemed to work fine without soaking since we got plenty of smoke and there were chips still in the firebox when we were done.  Put the grate on the inverted plate setter, squeeze the ribs in on the grate, bone side down, and shut the lid.  Watch the temperature, but don’t even think about opening it for at least 2 hours!

Not much else to do, for the next few hours, except to rotate the ribs around in the grill to prevent hot spots.  Instead of moving the ribs, which would muss up the rub, I turned the grate in 90 degree increments every hour or so.  Around the 4 hour mark, I started spraying them every 45 minutes or so with a “mop” sauce that contained a mixture of apple cider vinegar, Worcestershire sauce, water, and chili powder.  Here’s what they looked like after about 5 hours…getting close!

At the 6 hour mark, I spread a nice layer of barbeque sauce on top of the ribs.  You can use any sauce you’d like, of course, but I’d recommend a sauce that is not too sweet.  Here’s the sauce I made for these ribs…with lots left over!  (It’s great on meatloaf!)

Finally, after 7 hours and a few more layers of bbq sauce, the ribs are ready to come off the grill!  It’s a judgement call when they are ready – but I think you’ll know it when you see it!  The meat has drawn back from the bone, but is not falling off the bone (that would be too done).  You can give them a little wiggle with the tongs, and the meat will break a little when you bend it.

[UPDATE 07/11/2011:  We made this ribs again over the weekend, using Dizzy Pig’s Cowlick rub, and did not mop them during cooking.  This time they were done after 4 hours, so I sauced them and kept them on the grill for about 30 minutes, then wrapped them up in foil and kept them warm in the oven until dinner time.  I don’t know why they took less time, but we concluded that we probably overcooked them the first time (although they were still very good.)  Another conclusion:  these ribs are pretty forgiving!

UPDATE 04/12/2012:  Since posting the original recipe, I have discovered coconut palm sugar, which has a lower glycemic index than most other sugars.  I have updated the rub recipe to use coconut palm sugar instead of brown sugar.]

As much as you want to dig in, don’t do it yet!  Bring them in and cover with foil for around 15 minutes…let the meat juices get acclimated.  This is a good time to finish mixing up some creamy cole slaw and perhaps bake some sweet potato fries.

Imagine the patience of my poor husband, who also has to endure a photo shoot for the ribs…  This is truly the hardest part of this blog.

His patience is finally rewarded, as some of these ribs don’t make it back inside the house!

*Since chili powder is a major component of this rub, I made up my own.  As always, I recommend The Spice House for their high quality herbs, spices, and dried chiles!

She’s right, as Tom Petty sang…”The waiting is the hardest part…” and waiting on these ribs after smelling them all day was almost too much to take! But the wait is certainly worth it, mercy…

Shout out today to two legends, both sadly past.

Gil Scott-Heron passed away last week, far too early. Considered by many to be one of the grandfathers of rap, he spoke truth- and The Revolution Will Not Be Televised

contains some of his best and most insightful and provocative messages. From the oft-quoted title cut to “Lady Day and John Coltrane” or the biting “Whitey on the Moon”, this is a stone cold masterpiece.

Miles Davis would have been 85 last week, and really, what more can you say about the greatest trumpeter ever? Miles has been a hallmark of my musical life since high school, where I first heard In a Silent Way

. Sorta blew my little southern rock mind, it did. Try it…! 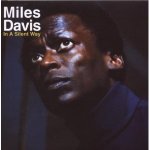